Innosilicon, a Chinese GPU maker, unveils a Fantasy One Chip for Discrete Graphics Cards. It can store up to 32 GB of GDDR6X memory, dual-GPU solutions, and 5 TFLOPs.

Chinese GPU maker, Innosilicon, has unveiled their first discrete chip, the Fantasy One, which will be featured in a range of graphics cards. The GPU .. 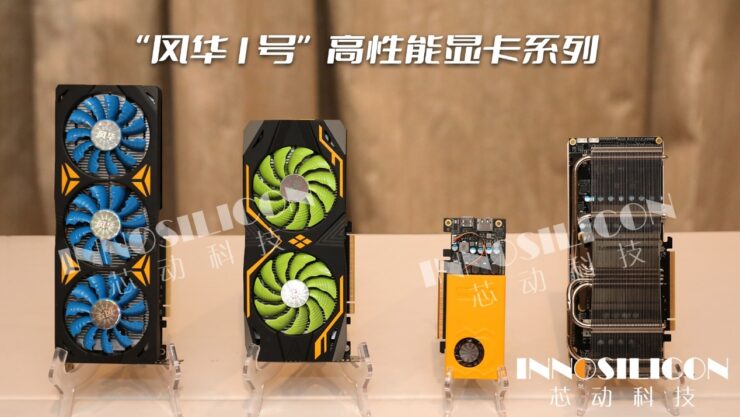 Chinese GPU maker, Innosilicon, has unveiled their first discrete chip, the Fantasy One, which will be featured in a range of graphics cards. The GPU is designed in collaboration with GPU designer, Imagination Technologies.

The GPU and the respective products that it will be featured within were unveiled at the 'Fantasy One GPU' product press conference. The Fantasy One GPU is based on the BXT IP from their GPU partner, Imagination Technologies. The company unveiled a total of four products ranging from single and dual-GPU-based solutions.

The first product to talk about is the Fantasy One GPU-powered Type A graphics card. Type A is the name of the graphics card and is not to be mistaken with USB Type-A ports. The Type A card comes in a dual-slot and dual-fan form factor and is said to offer up to 5 TFLOPs of FP32 and 160 GPixel/s fill rate. It seems like that this is a slightly cut-down variant of the Fantasy One GPU as the BXT GPU IP that it is based upon offers up to 6 TFLOPs of FP32, 24 TOPs AI and 192 GPixel/s fill rate. The GPU also relies on a multi-chip design so we are talking chiplets here but we don't have more details on that right now.

In terms of memory, the single Fantasy One GPU offers up to 16 GB of GDDR6X memory that runs across a 128-bit bus interface. The memory chips operate at 19 Gbps transfer speeds, offering up to 304 GB/s of bandwidth to the GPU. In addition to that, the card offers DisplayPort 1.4, HDMI 2.1, and VGA outputs. The card is powered by a single 6-pin connector. It is stated that the typical TDP for 4K rendering is around 20W while cloud rendering power is rated at 50W. There's also a server-specific model of Type A which utilizes a passive heatsink.

There is also an entry-level/small form factor solution based on the Type A Fantasy One GPU. This graphics card definitely rocks reduced specifications and clocks over the full variant considering its limited size and power. The graphics card PCB shown has a 4+1 phase design and rocks a small fan heatsink. It features HDMI 2.1 and DisplayPort 1.4 outputs. There are no power connectors on the card and it looks like you will also get lower memory capacity given the size constraints of the PCB.

On the high-end side, there's the Innosilicon Type-B graphics card featuring dual Fantasy One GPUs on the same PCB. The card uses an interconnect known as Innolink which might be a PLX chip that interconnects the two GPUs on the same board. The graphics card offers up to 10 TFLOPs FP32 and up to 320 GPixel/s fill rate. It can also run up to 32 1080p/60 FPS or 64 720/30 FPS streams. Type B rocks 32 GB of GDDR6X memory across a 128-bit bus interface. Power is provided through dual 8-pin connectors. All cards are PCIe Gen 4.0 compliant.

Innosilicon also isn't stopping at Fantasy One and already talking about Fantasy 2 and Fantasy 3 GPUs which are said to be unveiled in 2022 and will utilize 5nm process technology.