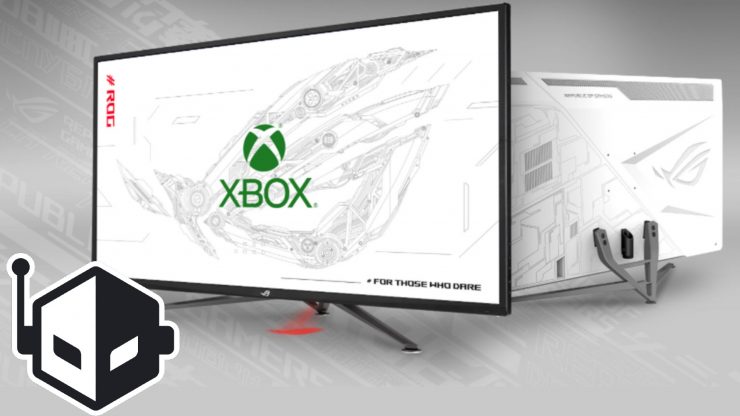 ASUS has introduced the ROG Strix XG43UQ Xbox Edition Gaming Monitor, which features a 43" screen size, a 4K resolution, and a 144 Hz refresh rate. This gaming monitor is designed for the newest Xbox gaming console, called the Xbox Series X and Xbox Series S. ASUS has yet to make an official statement regarding when this gaming monitor will be released or the price.

The ROG Strix XG43UQ Xbox Edition Gaming Monitor offers a white color scheme for the back panel; the back panel also features the ROG logo on the right side, while the left side features an incredibly unique design. This design easily allows this monitor to stand out in your gaming setup compared to other gaming monitors, which feature a standard black design. In addition to this unique design, it features a light projector that shows the ROG logo projected in red onto your desk.

It features a 43-inch screen size, a 144 Hz refresh rate, and a 4K resolution; these technical specifications allow for a fantastic gaming experience whether you are playing on a console or PC, thanks to the HDMI 2.1 inclusion and AMD FreeSync Premium Pro technology. This monitor has been co-developed with Microsoft with a built-in Xbox mode that ensures that this monitor features the best color, contrast, and hue performance for the Xbox Series X and S gaming consoles.

Its screen features a maximum brightness of 1000 nits and offers an Auto-Low-Latency mode which can significantly reduce input lag to less than half the latency of the standard 4K TVs. These two features make this monitor perfect for a console gaming setup!

This gaming monitor also comes with a bundled remote control that lets users adjust monitor settings from a distance and has 10-watt stereo speakers that allow for hi-fi-grade audio for a significantly better level of immersion.

ASUS has yet to make an official announcement on the ROG Strix XG43UQ Xbox Edition Gaming Monitor. The ROG web page doesn't mention any price or when this gaming monitor will be available for purchase. While the ROG webpage doesn't feature an price, the ASUS store page does feature a price of $1,399 and states that this gaming monitor will be available in October 2021 for seemingly the same monitor.

Read More
Did you miss our previous article...
https://deals.delivery/technology/reread-saturday-monotasking-week-1-logistics-game-plan-and-preface
gamingmonitorxboxgaming