YouTube channel HardwareUnboxed discovered recently a glaring issue with the next entry-level Radeon RX 6500 XT which releases in two days. The.. 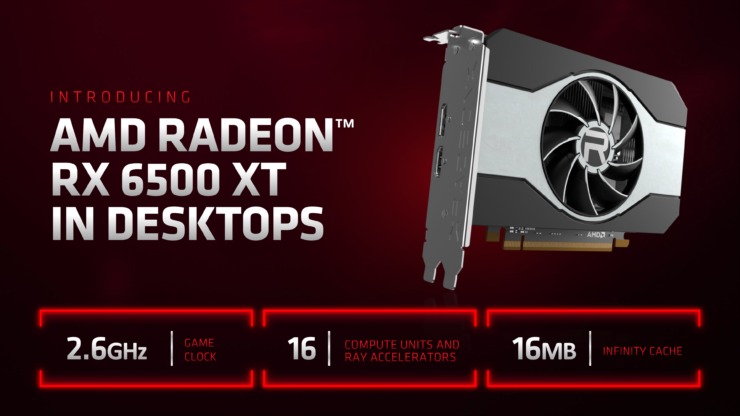 YouTube channel HardwareUnboxed discovered recently a glaring issue with the next entry-level Radeon RX 6500 XT which releases in two days. The problem discovered is that the bandwidth speeds of the new card are unable to keep up on an older Gen 3 platform which still several PC gamers in the entry-level segment are running.

But why is this an issue?

The issue at hand is that the AMD Radeon RX 6500XT graphics card, considered a budget graphics card for PC users, is equipped with just 4 PCIe Express interface lanes. Previous models, such as the AMD Radeon RX 5500 XT, feature 8 PCIe lanes that adopt both Gen 4 and Gen 3 protocols but with Radeon RX 6500 XT, you'd be limited to just 4 Gen 3 or Gen 4 lanes. Now while Gen 4 x 4 will be the best case scenario, it should be noted that most budget builders don't have motherboards that even carry Gen 4 slots so moving over to Gen 3 x 4 means a severe degradation in graphics performance.

This situation is unusual, primarily because with the technology, even in a previous PCIe generation, such as PCIe 3.0, it would stand to be correct that the more recent AMD graphics card would outperform the previous model. Unfortunately, that does not seem to be the case since at Gen 3 x 4 mode, the RX 6500 XT is going to be so severely bandwidth starved and that too on a 4 GB VRAM capacity, that it won't end up offering the advertised performance on many systems.

HardwareUnboxed notes that any issues in bandwidth should appear on the 4GB variant of the graphics card tested compared to its more powerful 8GB version. Since resources are stored in video memory and not taken from storage or the system's memory, the lesser card of the two would not outperform its more robust 8GB model. That was why HardwareUnboxed chose to use this particular graphics card for testing since it was a more comparable option to other models.

The YouTube channel found that games were immediately affected by the VRAM on the graphics card because of the device's limitations. There was anticipation that the results would show the impact from the constrained bandwidth interface of the card, resulting in showing that PCIe 3.0 with four lanes would limit the framerate to 1080p resolution levels. Also, it proved that the PCIe 4.0 interface, using eight lanes instead of the four lanes of the PCIe 3.0 interface, is 49% more efficient. So all in all, here are some key points to consider for the Radeon RX 6500 XT:

HardwareUnboxed plans to include PCIe Express testing in their review upon the day of release for the AMD Radeon RX 6500 XT. The AMD Radeon RX 6500 XC is based on the current RDNA2 architecture and does feature 16MB of Infinity Cache onboard the graphics card. And, with the upgrade mitigating bandwidth issues to a point, it is still not to be as impactful as one might think.

But that's not it, Momomo_Us (via Videocardz) managed to obtain even more listings of the RX 6500 XT graphics card and you won't be surprised if we tell you that none of that is at MSRP. In fact, these are cards are almost twice the MSRP, retailing at up to 378.44 Euros. That's $400-$430 US if you convert it and the MSRP is $199 US for the US market. We have seen ASUS state a 299 Euros pricing for their custom cards but in reality, it's going to be much higher.

The post AMD Radeon RX 6500 XT PCIe x4 Interface Is Going To Be A Deal-Breaker For Gen 3 Platforms, Listed Again For Almost Twice The MSRP by Jason R. Wilson appeared first on Wccftech.