Website DigiTimes reports that AMD and MediaTek are considering creating a joint venture, which would allow team red to further gain momentum in.. 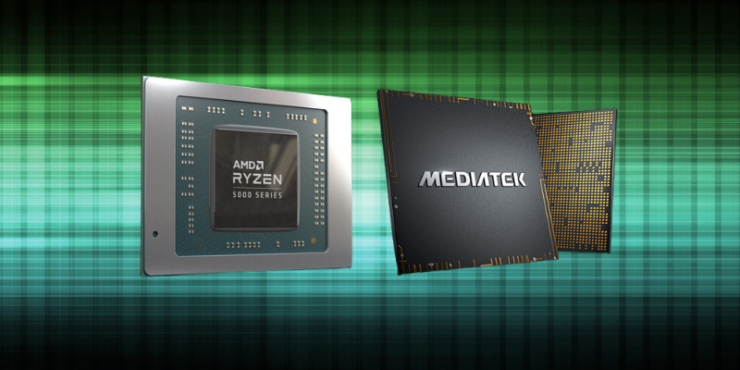 Website DigiTimes reports that AMD and MediaTek are considering creating a joint venture, which would allow team red to further gain momentum in mobile markets.

AMD & Meditek Rumored To Form A Joint Venture, Mainly In The Wireless Transmission Segment (For Now?)

This is considered heavy speculation, but if true, this would allow for MediaTek's efficient CPU cores to utilize AMD's RDNA2 graphics structure, a technology that Samsung is currently in the development stage for their next-generation Exynos chips. This would also further develop more customized SoC (System on Chip) solutions in the mobile technology spectrum, such as more efficient 5g connectivity, WiFi resources, and connectivity for large data transferring modems.

Samsung's upcoming RDNA2 based Exynos processor will be the first to launch in all markets. The mobile industry has been gradually modernizing with complex UI designs, powerful encoding capabilities, and much more. Featuring improved performance and graphics would suffice all of this and not just for graphic-intensive games.

The upcoming Exynos chip with AMD's RDNA2 graphics will support ray-tracing along with variable-rate shading.

AMD and MediaTek have worked in collaboration before with AMD's WiFi network modality chip, the RZ608. Based on reports, AMD's WiFi chip was in reality "a renamed Mediatek MT7921K."

MediaTek and AMD are already working together, albeit on a very small scale. There are the first PCs with an integrated WiFi chip, but behind which there is nothing more than a renamed MediaTek chip: AMD RZ608 alias MediaTek MT7921K. The future cooperation should build on there, but not only produce WiFi chips, but also 5G solutions for SoCs primarily for the notebook market. In the past, AMD has trusted Qualcomm with partners . Qualcomm's lead in this field is huge, MediaTek is also more likely to be found in the entry-level area - it remains to be seen what is true of this topic.

Qualcomm has worked on more projects with AMD than any other mobile device manufacturers. One project between the two companies involved a "line of products utilizing a Gigabit LTE modem by Snapdragon on the Ryzen Mobility platform."

If this new speculation is correct about team red working alongside MediaTek, this would further extend AMD in MediaTek's entry-level marketspace. Neither company has confirmed any joint venture with each other.

Digitimes reports this would be for wireless and wired transmission and the first SOC would appear in 2024 alongside AMD's notebook platform.
They say it could sell its SoC to 3rd parties.$AMD gets understanding on WiFi 6, MediaTek a big new market.
Similar to Intel CNVi?$INTC pic.twitter.com/9mDItVs9rK

AMD is scheduled to feature its graphics technology in mobile devices for the first time, with an expected release in the first quarter of 2022.

Read More
Did you miss our previous article...
https://deals.delivery/technology/morepowertool-now-shows-compatibility-with-windows-11-before-the-os-release
amdteamred