Before Aaron Rodgers pulled a 180 and decided to return to the Green Bay Packers, many wondered whether he would play for another NFL team in 2021...

Before Aaron Rodgers pulled a 180 and decided to return to the Green Bay Packers, many wondered whether he would play for another NFL team in 2021. After all, the reigning MVP refused to show up to voluntary organized team activities and mandatory minicamp. And with Jordan Love waiting in the wings, it certainly seemed possible that the Packers could open the 2021 season with the inexperienced second-year pro under center.

Luckily for Green Bay fans, they won’t have to see Rodgers in another team’s uniform until at least 2022. But based on everything that’s transpired over the last few months, the future Hall of Famer looks destined to get traded next offseason.

And in light of Vic Fangio’s blunt update on the Denver Broncos’ quarterback situation, there shouldn’t be any doubt about where Rodgers will end up once the Packers finally decide to part ways with the longtime face of the franchise.

After months of speculation that Rodgers could sit out the 2021 season or retire altogether, he didn’t choose either of those paths. Thanks to some last-minute negotiations, the Packers managed to get their star quarterback to return to work for another year.

Of course, Green Bay had to make some concessions to convince Rodgers to come to training camp, including reuniting him with trusted slot receiver Randall Cobb.

While the Packers look like a viable Super Bowl contender with their most accomplished player back in the fold, that doesn’t mean they’re necessarily set up for sustained success. By restructuring Rodgers’ contract to lower his 2021 cap hit by nearly $10 million, Green Bay simultaneously backed itself into a $46 million corner.

Unless the Packers plan on letting the three-time MVP take up roughly 25% of their 2022 salary cap, Rodgers will most likely get traded next offseason.

So, even though they took care of business to set themselves up for another run at the Lombardi Trophy, the Packers looks poised to undergo a major transition at the most important position in sports sooner than later. 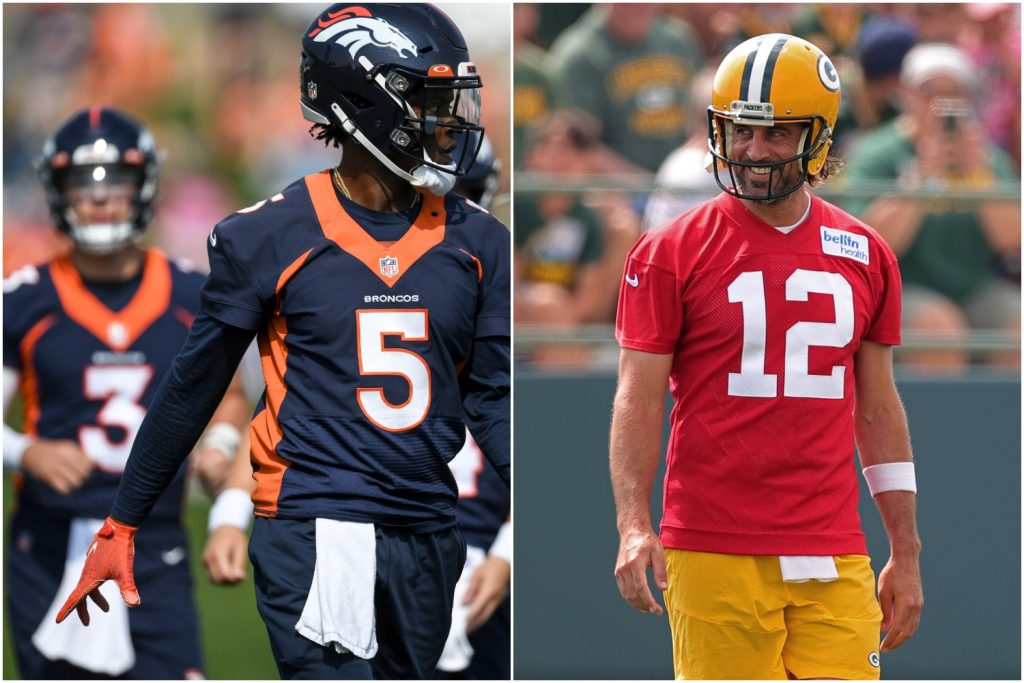 Unlike the Packers, the Broncos don’t have a star signal-caller on their roster. In fact, an argument can be made that Denver has one of the least inspiring quarterback situations in the entire NFL.

Third-year head coach Vic Fangio must decide whether Teddy Bridgewater or Drew Lock deserves to open the season atop the depth chart. While Bridgewater does have 49 starts under his belt, the 28-year-old posted a disappointing 15:11 touchdown-to-interception ratio during the 2020 season. Ultimately, his lackluster campaign convinced the Carolina Panthers to move in a different direction and trade the veteran to the Broncos for a sixth-round pick.

Meanwhile, Lock enters his third year with the franchise as a player with much to prove. Coming off a 13-game season in which he and Carson Wentz tied for the league-lead with 15 interceptions, the physically gifted passer can’t afford to keep turning the ball over and making critical mistakes if he wants to stick around Denver after the 2021 season.

While the situation may change as the Broncos get deeper into camp, Fangio’s latest update on the team’s starting quarterback battle should seal Rodgers’ fate with the Packers.

“It’s still even-steven,” he told reporters after Monday’s practice. “There’s been no separation. And we’re going to keep the rotation these next three days the same as it’s been.”

Considering the Broncos have been widely viewed as Rodgers’ most likely landing spot, Fangio’s assessment of the “battle” between Bridgewater and Lock should make it abundantly clear that Denver desperately needs to make an upgrade at the position. The Packers obviously won’t move their best player at this point, but given the state of the Broncos’ quarterback depth chart, there’s no doubt they represent a logical trade partner.

Barring some miraculous jump from either Bridgewater or Lock, Denver should enter the offseason as a team ready to make a major investment at the position. And what better way to do that then pull off a trade for a Hall of Fame-caliber player who clearly doesn’t have a long-term future with his current team?

Are the Broncos the best fit for the future Hall of Famer?

A lot can change over the course of the next six months. Perhaps Rodgers will lead his team to a Super Bowl title and both sides decide to continue the relationship. Then again, that would require the Packers to defeat the Tampa Bay Buccaneers in the playoffs—something they failed to do in January.

But if everything shakes out as expected, Rodgers will get dealt next offseason. And it’s hard not to view the Broncos as a solid fit for the nine-time Pro Bowler.

Why’s that the case?

First, Denver has an excellent group of young, talented skill players. While Davante Adams may be the best receiver in the NFL, wouldn’t Rodgers look good throwing the ball to the talented trio of Jerry Jeudy, Courtland Sutton, and KJ Hamler? Plus, tight ends Noah Fant and Albert Okwuegbunam possess elite athleticism for the position, which makes them major threats in the passing game.

Moreover, Javonte Williams may not start right away, but the 2021 second-round pick has all the tools needed to become a high-impact player. A second-team All-American in his final season at the University of North Carolina, the 5-foot-10, 220-pound back could take some pressure off Rodgers and give the offense better balance moving forward.

For a team that looks bound to take a step forward on defense in 2021, it would make sense to go all-in on fixing a roster flaw that’s existed ever since Peyton Manning retired.

And wouldn’t it be ironic if another Canton-bound quarterback leads the Broncos to a Super Bowl title before he retires, too?

It certainly wouldn’t be a bad time for Aaron Rodgers to start getting familiar with the Denver real estate market.

RELATED: Nick Chubb Secured His Future With the Browns by Making a $36.6 Million Decision He Should Already Regret

Read More
Did you miss our previous article...
https://deals.delivery/sports/nascar-interview-goes-off-the-rails-after-ryan-blaney-discovers-instagram-filters-this-leaves-joey-logano-and-austin-cindric-and-makes-them-laugh-hysterically