Urban Meyer's Career Path may Already Take Him Out of Jacksonville and Back To College Football, Whether he Admits it or Not.

Urban Meyer has only coached in one NFL game, but things aren’t looking too great for him and the Jacksonville Jaguars. In fact, some reports are..

Urban Meyer has only coached in one NFL game, but things aren’t looking too great for him and the Jacksonville Jaguars. In fact, some reports are already suggesting that he could be on his way out of town.

The Jags were embarrassed by the Houston Texans in Week 1, and one day later, the USC Trojans’ head coaching job opened up. Speculation has since gone rampant, and it looks like there’s now a chance Meyer could maybe ditch Jacksonville and return to the world where he is king (well aside from Nick Saban, of course): college football.

The USC Trojans entered the 2021 college football season with hopes of winning a Pac-12 title. Instead, they lost 42-28 at home to Stanford in their second game of the season. The school’s athletic director, Mike Bohn, then announced two days later on Sept. 13, that head coach Clay Helton had been fired.

The firing, however, came just one day after Urban Meyer’s Jaguars lost to the Houston Texans — one of the worst teams in football — 37-21. The team essentially struggled in every area of the game, as Trevor Lawrence threw three interceptions, and both running backs, Carlos Hyde and James Robinson, failed to run for over 45 yards. Defensively, the Jags allowed Tyrod Taylor to throw for 291 yards and two touchdowns, and they gave up 85 rushing yards to Mark Ingram.

All in all, it was an ugly loss, which is something Meyer didn’t deal with much during his days as Florida and Ohio State’s college coach.

So, why not just go back to what you know best?

He could reportedly take the USC job

"I gotta text from somebody in the league & they said Urban to USC.. he said maybe pro football isn't sitting well with Urban Meyer" [email protected] #PatMcAfeeShowLIVE pic.twitter.com/OpK953vUrc

With Helton’s recent firing, former NFL executive Michael Lombardi took to Twitter and reported: “Folks in Columbus that I trust tell me that Meyer might love going back to college.”

He added: “The timing of this move for USC tells me there is something brewing–not sure what, but something.”

Lombardi then went on The Pat McAfee Show to expand on his tweet.

“I’m just minding my own business yesterday watching tape, and I get a text from somebody in the league, and they said, ‘Urban to USC,’” he said on the Sept. 14 episode. “I said, ‘No way.’ And the guy says, ‘You want to bet on it?’ When he said that, I’m thinking, ‘Wait a second here, he knows way more than I do.’ … So, I said, ‘Well, tell me why.’ He said, ‘Look, everybody in Columbus’ — and this gentleman’s from Columbus — ‘knows that pro football may not be sitting well with Urban.’”

Lombardi continued: “They’re gonna deny all this; we all know that … but when he was working for Fox, everybody in Los Angeles and Columbus thought he was going to take the USC job, but Clay Helton is the ultimate survivor.”

Lombardi added that the timing of Helton’s firing was “interesting” because it came after only the second game of the season. He was also right about one thing: Meyer has denied any interest in USC.

“No chance,” Meyer said on Sept. 15, per Sports Illustrated. “I’m here, I’m committed to try and build an organization.”

But history has taught us that we should take his comment with a grain of salt.

History suggests that Urban Meyer could eventually go to USC 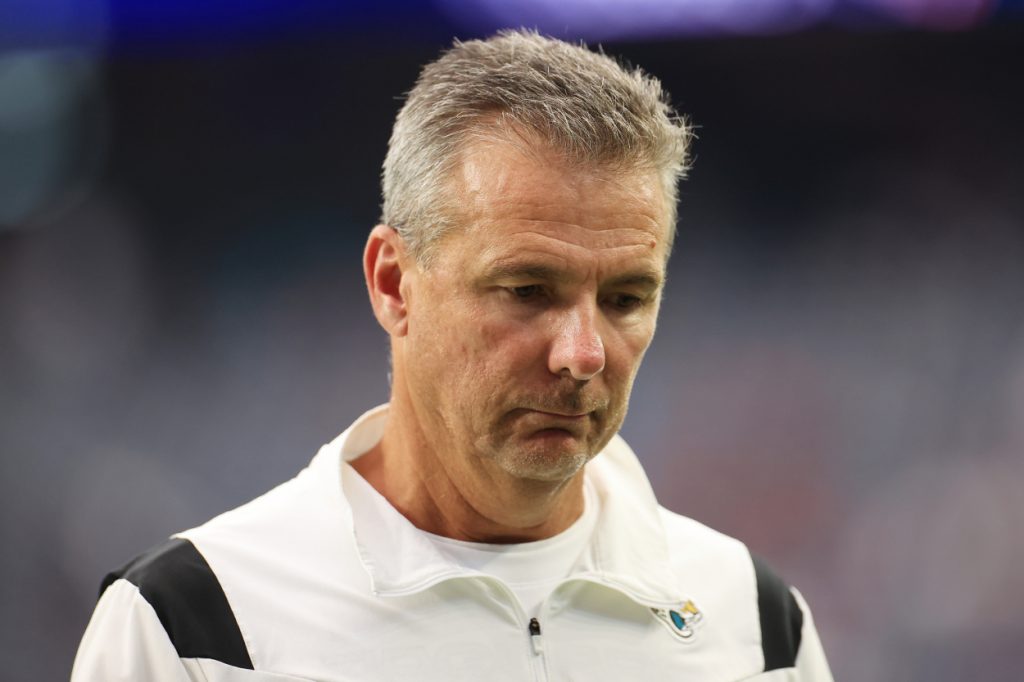 Urban Meyer of the Jacksonville Jaguars after losing to the Houston Texans on Sept. 12, 2021. | Carmen Mandato/Getty Images

Urban Meyer has shown us various times throughout the years that you can’t always trust what he’s saying.

He left Florida for health reasons after the 2010 season but then just took one year off before taking the Ohio State job in 2012, per ESPN. He also retired from coaching after the 2018 season with the Buckeyes and cited health problems as one of his reasons, but became head coach of the Jaguars this past offseason.

Maybe, health issues did force him to exit both schools. But why keep returning to a stressful job?

Those aren’t the only times Meyer has hurt his credibility, though. In addition to some off-field issues with his teams at Florida and Ohio State, Meyer went out of his way to give his former player, Tim Tebow, a job on the Jags this offseason. Tebow hadn’t played in the NFL since the 2012 season, so did Meyer actually think he had a chance of making the team? Or did he just want to help his friend?

The Jags eventually cut Tebow before the season even started, so it was likely the latter. But how can we believe he’s committed to building an organization when he gives washed-up stars a chance?

What we do know, though, is that Meyer would completely transform USC’s program, which hasn’t been atop the college football world since Pete Carroll‘s departure over a decade ago. Meyer has won everywhere he has been in college, and he hasn’t just found regular-season success; his teams have competed for national championships. He even won three national titles during his college coaching career.

Given USC’s storied history and the current evolving landscape of college football due to the new name, image, and likeness rules, Southern California could be a perfect spot for Meyer to win and win quickly.

Sure, the Jacksonville coach might be denying any interest in USC right now. But with the stresses of the NFL and his history of success in college, the Trojans may be too good of an opportunity to pass up.

The post Urban Meyer’s Career Path May Already Be Leading Him out of Jacksonville and Back to College Football Whether He Admits It or Not: ‘They’re Gonna Deny All This’ appeared first on Sportscasting | Pure Sports.

By: David Wysong
Title: Urban Meyer’s Career Path May Already Be Leading Him out of Jacksonville and Back to College Football Whether He Admits It or Not: ‘They’re Gonna Deny All This’
Sourced From: www.sportscasting.com/urban-meyer-career-path-may-out-jacksonville-back-college-football/
Published Date: Wed, 15 Sep 2021 20:23:20 +0000