The Tennessee Titans may expose the Arizona Cardinals' greatest weakness

The Arizona Cardinals are entrenched in arguably the NFL’s toughest division, the NFC West. After falling apart toward the end of their 2020 season,..

The Arizona Cardinals are entrenched in arguably the NFL’s toughest division, the NFC West. After falling apart toward the end of their 2020 season, Kliff Kingsbury‘s squad hopes to start the 2021 season on a high note against the Tennessee Titans.

The Cardinals have a talented roster, but there are some holes that they will need to account for. Their biggest weakness may ultimately become their undoing if not addressed by the team. The Titans are the perfect team to expose it to the rest of the league.

The Arizona Cardinals have a huge question mark at cornerback

The Cardinals have a potentially big problem looming this season. Their cornerback situation is shaky at best, heading into Week 1.

The Cardinals were a middle-of-the-pack defense at defending the pass. They weren’t great, but they weren’t awful either. Patrick Peterson spent 10 seasons in Arizona for the franchise that drafted him in 2011. The LSU product is no longer in his prime, and it showed on the field. Once a feared shutdown corner, Peterson was often targeted by opposing quarterbacks. Pro Football Focus gave the former Pro Bowler a grade of 55.2.

The team parted ways with Peterson and replaced him with former Super Bowl hero Malcolm Butler. After spending the past two seasons with the Titans, he signed with Arizona on a one-year deal. Butler was projected to be a starter but delivered a crushing blow after suddenly retiring.

With the loss of Butler, the spotlight will be on third-year cornerback Byron Murphy. The 2019 second-rounder started all 16 games as a rookie and made seven starts in 2020. He’s recorded 129 tackles, 18 pass defenses, and one interception in two seasons with the Cardinals.

Murphy looked good in the preseason, the defense will ask more of him in 2020. He will likely spend time playing on the outside and in the slot. Robert Alford will be the other starter. The 32-year-old is entering his first season with the Cardinals. He’s never been considered a shutdown corner. Rookie Marco Wilson should receive significant playing time as well. According to the Arizona Cardinals team website, the Florida product has been getting advice from star wideout DeAndre Hopkins.

The cornerback position room in Arizona is largely unproven, and the matchup with Tennessee will show where they stand.

The Tennessee Titans feature one of the best wide receiver duos 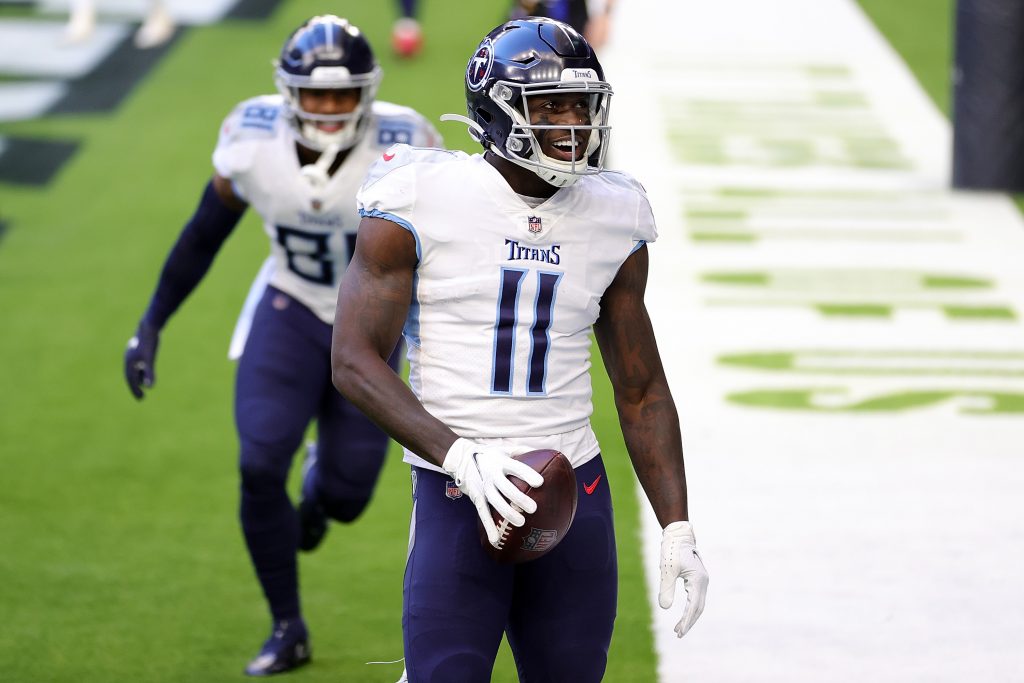 The Arizona Cardinals have questions at cornerback. On the flip side, the Tennessee Titans have answers at wide receiver.

A.J. Brown put together back-to-back 1,000-yard campaigns in his first two seasons with the Titans. Through two seasons, he’s caught 122 passes for 2,126 yards and 19 touchdowns. Brown fell to the second round of the 2019 NFL Draft but has already proven to be a first-round value.

Tennessee struck a trade with the Atlanta Falcons in the offseason, acquiring Julio Jones. The All-Pro wide receiver adds a new dimension to an already dangerous Titans offense. Jones dealt with nagging injuries throughout the 2020 season. Still, he’s consistently been one of the best receivers in the game since entering the NFL.

Brown and Jones on the same offense present a unique challenge for opposing defenses. They’re both physical weapons who are capable of making big plays at all three levels. Jones is 32 years old and just past his prime, but he can still be elite when healthy. Brown is a threat to score whenever Ryan Tannehill throws his way.

The young Cardinals cornerbacks will have their work cut out for them trying to defend the Titans’ receivers. Jones and Brown are strong big-bodied weapons. Given the uncertainty in Arizona’s secondary, they both could be in line for monster games in Week 1.

The Cardinals face several explosive offenses in their own division

The outlook for the Cardinals corners looks bleak for Week 1 against the Tennessee Titans. It will be a significant test for their young secondary, but they’ll be tested all season long.

All four NFC West teams have explosive offenses, including the Cardinals. Kliff Kingsbury prides himself on running a high-powered, led by Kyler Murray and DeAndre Hopkins. Arizona will most likely be involved in several shootouts throughout the 2021 season.

The Rams brought in Matthew Stafford to hopefully take their offense to the next level. He didn’t have much to work with for multiple years in Detroit but now walks into a perfect situation. Sean McVay is known for his offensive play-calling. He draws up plays to get Robert Woods and Cooper Kupp the ball.

Similar to McVay, Kyle Shanahan is an innovative play-caller. The 49ers have several playmakers, including George Kittle, Brandon Aiyuk, and Deebo Samuel. Aiyuk and Samuel are both dynamic runners with the ball in their hands, so Arizona will need to account for them at all times.

The Seahawks may present the biggest challenge of all the NFC West teams. Los Angeles and San Francisco don’t have a receiver like D.K. Metcalf. He’s 6-foot-4, 229 pounds, and runs a sub-4.4 40-yard dash. His unique combination of size and speed may be a serious issue for the smaller cover guys for the Cardinals.

Division games make up six of a team’s 17-game schedule. If the cornerbacks don’t fare well, it could be another disappointing season for the Arizona Cardinals.

RELATED: Former Super Bowl Hero Malcolm Butler is Mulling Retirement Due to a Mysterious ‘Personal Situation’ as Team Says, ‘We Don’t Have a Clue Why’

The post The Arizona Cardinals May Unfortunately Have Their Biggest Weakness Exposed By the Tennessee Titans appeared first on Sportscasting | Pure Sports.

By: Brandon Austin
Title: The Arizona Cardinals May Unfortunately Have Their Biggest Weakness Exposed By the Tennessee Titans
Sourced From: www.sportscasting.com/arizona-cardinals-may-unfortunately-have-biggest-weakness-exposed-tennessee-titans/
Published Date: Fri, 10 Sep 2021 19:36:00 +0000

Read More
Did you miss our previous article...
https://deals.delivery/sports/zach-ertzs-longdesired-plane-tickets-out-of-philadelphia-may-have-been-purchased-by-an-unexpected-eagles-teammate
arizonacardinalstennesseetitans