Prior to the 2019-20 season, the San Antonio Spurs made the playoffs 22 straight years. During that span, the franchise won five NBA championships..

Prior to the 2019-20 season, the San Antonio Spurs made the playoffs 22 straight years. During that span, the franchise won five NBA championships and made five more Western Conference Finals appearances.

Before two years ago, the last time the Spurs didn’t make the playoffs was the 1996-97 season. Their reward for missing that year’s postseason: the No. 1 overall pick in the draft and a guy named Tim Duncan.

Head Coach Gregg Popovich took over during that ’96-97 season and has been captain of the ship since. But after missing the playoffs the last two years and piecing together the bread crumbs from this offseason, the Pop Dynasty looks to finally be coming to a close.

It appears San Antonio is finally pushing the reset button and blowing it all up. 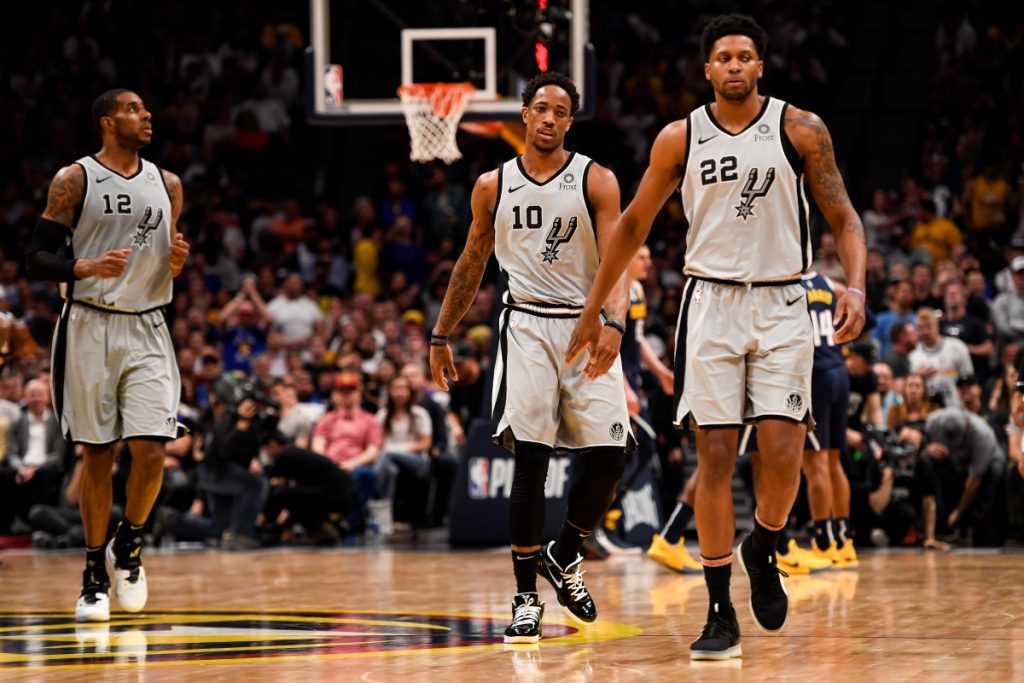 LaMarcus Aldridge, DeMar DeRozan, and Rudy Gay of the San Antonio Spurs show signs of frustration during the third quarter of a game against the Denver Nuggets | Aaron Ontiveroz/MediaNews Group/The Denver Post via Getty Images

When the Spurs last made the playoffs in 2018-19, the team lost in the first round to the Denver Nuggets. San Antonio’s top three leading scorers were LaMarcus Aldridge, DeMar DeRozan, and Rudy Gay.

Aldridge retired during last season. DeRozan was shipped off to Chicago in a sign-and-trade. Gay signed with the Utah Jazz as a free agent.

Combined, those three averaged 56.2 points per game last year for the Spurs. They also had a combined age of 100 years old and a combined salary of nearly $60 million.

That’s not taking into account Patty Mills (32 years old, $13.5), who signed with the Brooklyn Nets.

San Antonio selected Alabama guard Josh Primo with the 12th pick in this year’s draft. Primo was literally the youngest player in the entire class and wasn’t sniffing the lottery in any mock drafts. That should’ve given everyone a head’s up about what was coming next.

The Spurs signed free agent sharpshooter Doug McDermott to a three-year deal. Dougie McBuckets is 29 years old. San Antonio also brought sharpshooting guard Bryn Forbes back to Texas. The contract details are unknown at this point, but it’s a safe assumption that the 28-year-old’s deal is short and cheap. Admittedly, both players are older veterans, but both add shooting and spacing to an offense that was sorely lacking in that department last year. Those are the kind of low-usage additions that fit well on a rebuilding roster.

Barring any other additions, the two are also set to be the oldest players on the Spurs’ roster in 2021-22.

I want to take the time to thank the Spurs organization and the fans in San Antonio for embracing me the way that they have over the past 3 seasons. The Spurs lived up to their reputation as one of the classiest organizations in the league during my time with the team… pic.twitter.com/o1hyj7TAZe

The Spurs’ active roster, as currently constructed, has an average age of 23.7. That’s before factoring in the 18-year-old Primo. That would have been the youngest roster in the league last season, according to NBA.com.

San Antonio acquired Thaddeus Young and Al-Farouq Aminu in the DeRozan sign-and-trade. Both are on expiring contacts and will free up nearly $25 million in cap space next year. The franchise holds all of its future first-round picks.

The franchise rebuild is on. Every NBA organization has to go through it at some point, even one as steady as the Spurs. But San Antonio has missed the playoffs the past two seasons and has only had two bottom-of-the-lottery picks to show for it. At some point, it’s best just to rip off the band-aid and let the wound breathe.