The Buffalo Bills added insult to injury with a ruthless post-game jab directed at Tua Tagovailoa, and the Miami Dolphins

The Buffalo Bills absolutely crushed the Miami Dolphins during their Week 2 AFC East showdown in more ways than one.Meeting for the first time this..

The Buffalo Bills absolutely crushed the Miami Dolphins during their Week 2 AFC East showdown in more ways than one.

Meeting for the first time this season, there was significant hype attached to the Bills-Dolphins first matchup. Miami was coming off an impressive Week 1 victory over Mac Jones and the New England Patriots. The Bills were looking to rebound following an ugly season debut against the Pittsburgh Steelers.

Both Buffalo and Miami are looking to contend for a postseason spot after aggressive offseasons. Both teams intensely value these divisional matchups.

To put it bluntly, the Dolphins looked completely outmatched during their Week 2 duel with the Bills. Buffalo steamrolled their way to a 35-0 win, comfortably controlling the tempo for the entirety of the afternoon.

Allen threw for 179 passing yards and two touchdowns, and running back Devin Singletary rumbled his way to 82 rushing yards on just 13 carries. It’s a compelling and promising win for the Bills, one that should get them back on the right track as they look to defend their AFC East crown.

On the other side of the discussion, Week 2 was a complete disaster for the Dolphins. Not only did they get absolutely steamrolled at home, but they also lost their starting quarterback to a rib injury. Tua Tagovailoa had to be carted off the field after a crushing hit in the pocket.

Tagovailoa left the game and did not return. It’s reportedly being diagnosed as bruised ribs (which is actually good news for Dolphins fans).

Nice to get a win in front of the home crowd.

Poking fun at the fact that a good number of Bills fans showed up for the game down in South Florida, the Bills were able to rile up their division rival one final time before turning their attention to Week 3. It did start feeling like a home game for Buffalo, for what it’s worth, as the score became increasingly lopsided.

It was unquestionably an afternoon that belonged to the Bills and their “Bills Mafia” fan base.

What next for the Miami Dolphins? 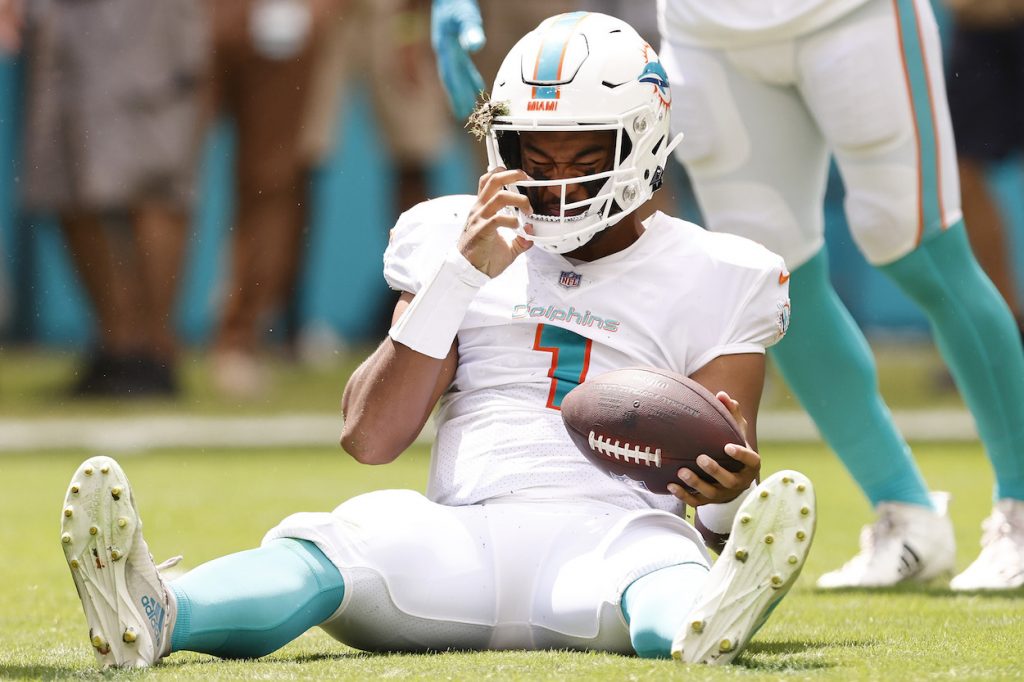 The Dolphins desperately want to close the gap between the Bills and themselves. However, thus far, they’ve had essentially zero success.

The Dolphins lost both meetings with the Bills last season, including an embarrassing 56-26 defeat to wrap up the regular season. As far as this AFC East “rivalry” is considered, it’s very much a lopsided affair.

Moving forward, the Dolphins are already facing a dilemma at the quarterback position. Tagovailoa didn’t look particularly impressive during Week 1 despite the win and is potentially looking at an injured reserve stint following his bruised rib diagnosis. The Dolphins will likely turn to veteran QB Jacoby Brissett should Tagovailoa miss time, but there’s the ever-daunting Deshaun Watson question that looms overhead.

If the Dolphins completely lose faith in Tagovailoa and his ability to stay healthy, I wouldn’t rule out a midseason blockbuster trade for Watson.

Regardless, the Dolphins will have to put their dreams of dethroning the Bills on pause for the moment. It is very much still Buffalo’s division to lose.

RELATED: Where Is Tua Tagovailoa From?

The post The Buffalo Bills Added Insult to Injury With a Ruthless Post-Game Jab Directed at Tua Tagovailoa and the Miami Dolphins appeared first on Sportscasting | Pure Sports.