However, while Rondo has a chance to help a revitalized Cavs squad contend for a championship, his connection to the organization actually goes back almost 12 years.

Back when he played a part in LeBron James skipping town.

After starting his career with the Boston Celtics in 2006, Rajon Rondo played a significant role in the Cs winning a championship in 2008. He averaged 10.2 points and 6.6 assists during that playoff run and helped them eventually beat Kobe Bryant and the Los Angeles Lakers in the NBA Finals.

A couple of years later, though, Rondo had one of the best postseasons of his life.

The Celtics entered the 2010 playoffs as the No. 4 seed, and after beating the Miami Heat in the first round, they played LeBron James and the No. 1-seeded Cleveland Cavaliers in the Eastern Conference semifinals. The Cavs had just finished a regular season where they had the league’s best record for the second straight year, and they went out and added NBA legend Shaquille O’Neal and former All-Star Antawn Jamison.

But the last thing Cleveland expected heading into the series was for Rondo to be the man they needed to stop. The Celtics had future Hall of Famers Kevin Garnett, Paul Pierce, and Ray Allen, but the 23-year-old from Kentucky became their go-to guy.

Rondo led Boston in scoring that series with an average of 20.7 points. He even dropped 27 in Game 1 and 29 in Game 4. But what really made him difficult to guard was his playmaking abilities. Rondo averaged 11.8 assists in those six games against the Cavaliers. And during his 29-point performance, he also had 13 dimes and 18 rebounds.

That was essentially the beginning of the legend that is now “Playoff Rondo,” and it resulted in the Celtics upsetting the Cavaliers in six games. They won the final three contests by a combined 51 points and later made the NBA Finals against the Lakers again.

However, the win also played a part in LeBron leaving Cleveland.

LeBron James left the Cavaliers after that series 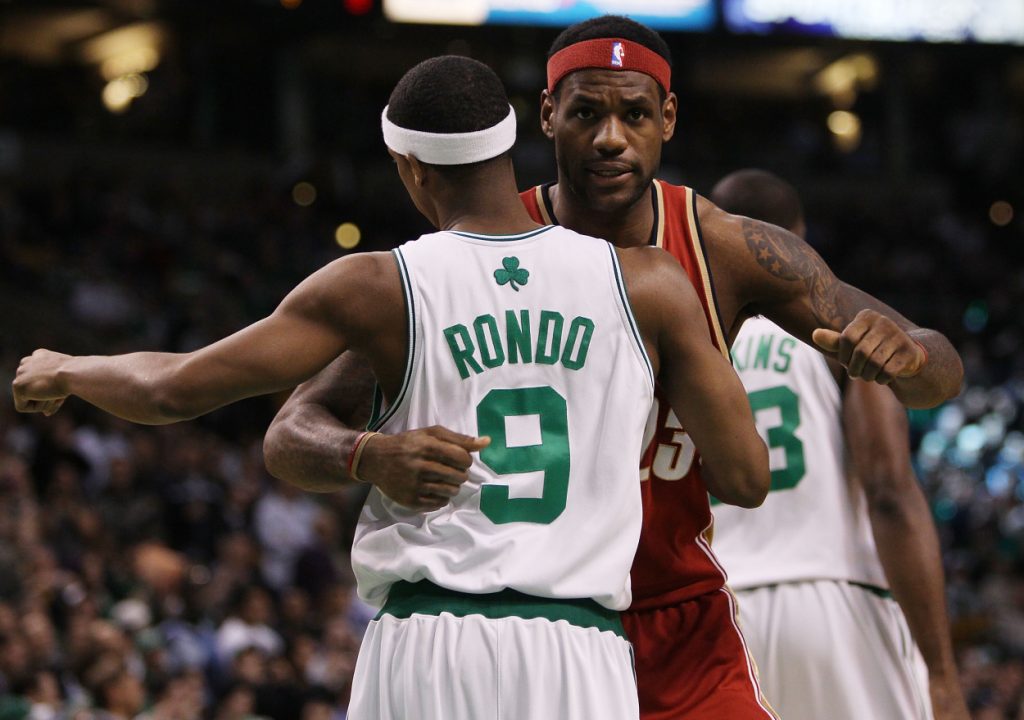 LeBron James of the Cleveland Cavaliers greets Rajon Rondo of the Boston Celtics before a game on Feb. 25, 2010. | Elsa/Getty Images

That disappointing playoff loss further proved that it would be difficult for LeBron James to ever win a title with the Cavaliers as they were constructed.

A couple of months later, he announced he was leaving Cleveland to join Dwyane Wade and Chris Bosh on the Heat. The three superstars essentially joined forces so they could beat the Celtics (a team both Wade and James struggled with) and win championships.

As you likely know, James and the Heat appeared in four straight NBA Finals, and they won two of them.

So, while LeBron later returned to the Cavaliers and won a title with them in 2016, Rondo and the Celtics’ 2010 upset played a significant role in his first departure. Who’s to say he would have even left Cleveland had the Cavs won a championship that season or, at the very least, reached the Finals?

Rajon Rondo now returns to Cleveland, but as a Cavs player

Almost 12 years after sending LeBron James packing, Rajon Rondo is now on the Cavaliers. And he’s likely hoping he can help them do the unthinkable.

This year, the Cavs have surprised everyone, starting 21-17 and vying for a spot in the Eastern Conference playoffs. But after the injuries to Ricky Rubio and Collin Sexton, Rondo will now look to bring them stability at guard alongside third-year star Darius Garland.

Garland is the only healthy (and regular) Cavs player averaging over 2.5 assists this season. But Rondo’s ability to find the open man – which he showed during the 2010 conference semifinals against the Cavaliers – should take some pressure off Garland and help Cleveland’s offense run like a well-oiled machine.

All in all, Rondo can help the Cavs accomplish something special this season. And he knows quite a bit about putting on some special performances in Cleveland. Maybe, he will have a few more himself.

RELATED: Ranking Darius Garland and the 4 Best Players on the Surprising Cleveland Cavaliers

Read More
Did you miss our previous article...
https://deals.delivery/sports/buccaneers-legend-warren-sapp-reacts-to-antonio-browns-shocking-midgame-exit-my-mouth-hit-the-floor
lebronjamesrajonrondo