Antonio Brown established a reputation as arguably the best receiver in the NFL during his days with the Pittsburgh Steelers. His ability to torch..

Antonio Brown established a reputation as arguably the best receiver in the NFL during his days with the Pittsburgh Steelers. His ability to torch cornerbacks and safeties with relative ease helped him rack up not only prolific statistics but also quite a bit of cash.

While Brown has lost more than $300,000 because of fines, the controversial wideout still has an impressive net worth. However, his bank account balance would look even better if not for Mark Davis.

In fact, AB is missing $30 million thanks to the Las Vegas Raiders owner and the power of irrefutable evidence.

Although Brown began his NFL career on the low end of the salary totem pole, the 2010 sixth-round pick quickly put himself in a position to land a life-changing raise. Following a breakout second season with the Steelers that included 69 catches for 1,108 yards, the Miami native signed a five-year, $42.5 million contract extension.

In terms of on-field production, Brown more than lived up to his lucrative deal. From 2013-18, he averaged 114 catches for 1,524 yards and 11 touchdowns per season.

However, even though the Steelers gave the star wideout a four-year, $68 million extension in 2017, it became clear Brown would not stick around for long. Eventually, his dissatisfaction with the team and his contract forced Pittsburgh to finally part ways with the All-Pro pass catcher.

Unfortunately for the Raiders, they traded a pair of mid-round picks for a player who ultimately did nothing to help the franchise. Instead of upgrading the offense, Brown created controversy by damaging his feet during a cryotherapy session and refusing to wear a league-approved helmet. He also got into a verbal altercation with general manager Mike Mayock that generated even more speculation about his future in Las Vegas. 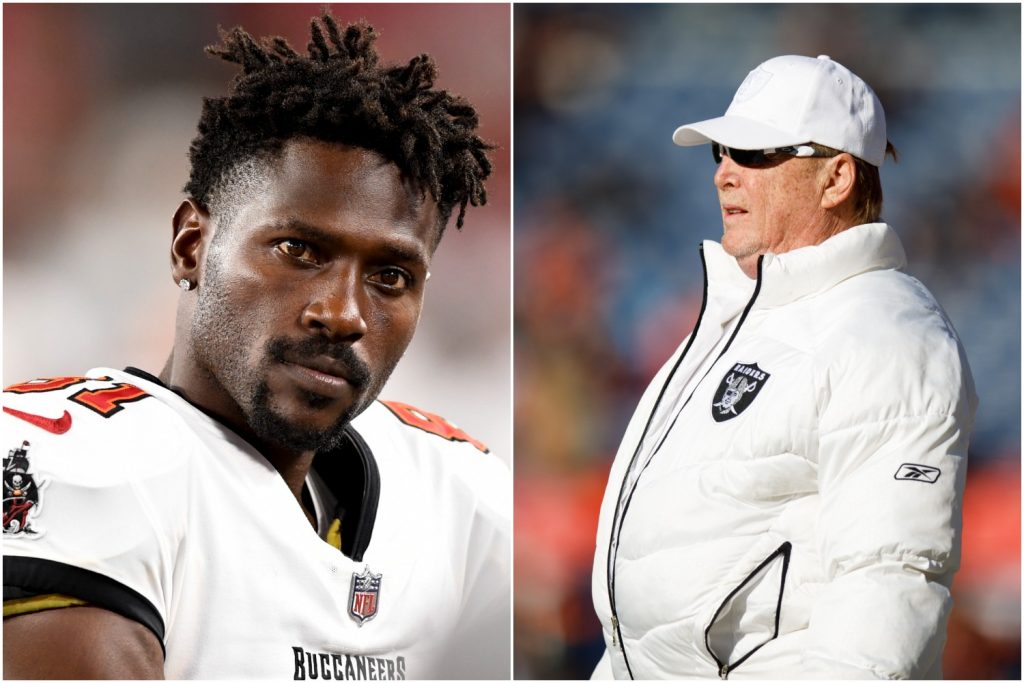 Although he spent less than six months with the Raiders, Brown remained a huge headache for the franchise for much longer. Then again, that shouldn’t have been a shock given the costly ramifications of his release.

Shortly after he got traded to Las Vegas, he signed a three-year contract that contained $30 million guaranteed. But when the team refused to honor that commitment, it led to even more drama.

Brown filed a grievance against the Raiders seeking lost wages. In most cases, a player would seemingly have a strong case to recoup guaranteed money. Unfortunately for the 33-year-old, he’s missing $30 million from his bank account because of the man who foolishly hitched his wagon to Jon Gruden: Mark Davis.

ESPN’s Chris Mortenson tweeted that during the discovery phase of Brown’s grievance case, the Raiders submitted multiple text messages that showed the receiver asked Davis for his release. Of course, the team cut him on Sept. 7 following several drama-filled months that included an Instagram post with the caption, “Release me Raiders #NoMore.”

Thanks to his own doing, AB went from convincing the Raiders to sign him to a contract with $30 million guaranteed to losing his job, severely damaging his reputation, and ruining his chances of recouping all that money. Needless to say, he experienced quite the downfall once he left Pittsburgh.

Luckily for the potential Hall of Famer, he still has Tom Brady on his side.

Will sticking by Tom Brady’s side continue to pay off for the controversial wideout?

Tom Brady had to learn a brand new system for the first time in his career last year.

Is it that hard to imagine a scenario where the GOAT and one of the best receivers of all-time level up and lead the league in receiving next year? pic.twitter.com/Tg3bu58CgL

Even though he lasted just one game with the Patriots, AB obviously formed quite a connection with the GOAT. After all, he’s received unwavering support from TB12 despite all of his off-field drama.

The Buccaneers certainly benefitted from Brady’s faith in Brown a year ago. The duo hooked up for two touchdowns in Super Bowl 55, and general manager Jason Licht made sure to keep their relationship going by signing AB to a one-year deal worth up to $6.25 million.

If everything goes according to plan, the veteran wideout will continue to play an integral role in the offense. Whether Brown can stay healthy for a 17-game season remains a mild concern based on his age, but he should put up solid numbers playing in a loaded offense.

At this point, the Buccaneers look poised to go on another deep playoff run that could very well end with another boat parade in Florida. But there are also other teams that could play spoiler to Tampa’s title dreams.

And if anyone is familiar with the concept of nothing being guaranteed, it’s certainly Antonio Brown.

The post Antonio Brown is Missing $30 Million From His Bank Account Thanks to Raiders Owner Mark Davis appeared first on Sportscasting | Pure Sports.