Joe Thomas, a former Browns star, sparked outrage after trolling the Steelers during the Playoff loss to the Chiefs: "Participation Trophy"

The AFC North rivalry between the Cleveland Browns and the Pittsburgh Steelers lives on. Pittsburgh fell to the Kansas City Chiefs in the Wild Card..

The AFC North rivalry between the Cleveland Browns and the Pittsburgh Steelers lives on. Pittsburgh fell to the Kansas City Chiefs in the Wild Card Round of the NFL playoffs, ending the season in disappointment. After the game, former Browns offensive lineman Joe Thomas poked fun at the Steelers, which didn’t go over well in Terrible Towel country.

Joe Thomas trolls the Steelers after loss to the Chiefs 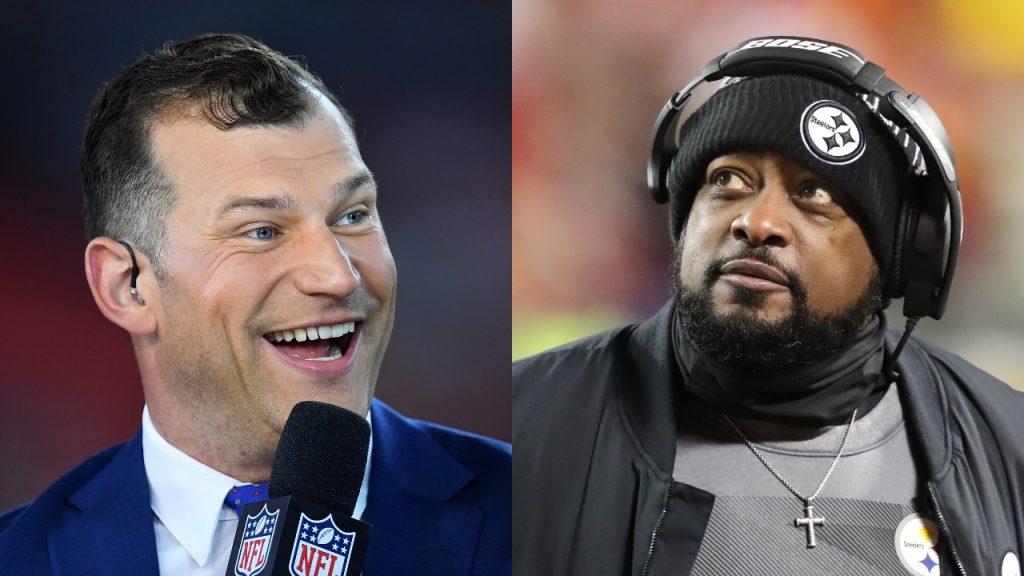 As Ben Roethlisberger eloquently suggested, the Pittsburgh Steelers were massive underdogs heading into the wild-card matchup against the Kansas City Chiefs.

Despite the disparity, Pittsburgh came to play early on. The Steelers were in good shape until the second quarter happened. Mike Tomlin’s squad struck first with a defensive touchdown. After that, Patrick Mahomes and company started piling it on.

The Chiefs went on to win the game 42-21, effectively ending the Steelers’ 2021 season (and likely Ben Roethlisberger’s career).

Former Cleveland Browns star Joe Thomas took to Twitter to troll the Steelers and their fans after the tough playoff loss.

Clearly, the 10-time Pro Bowl selection still holds some disdain for the AFC North rivals, especially after they pretty much ended the Browns’ season.

The former Browns Pro Bowler never made the playoffs himself

Did you ever get one of those? No https://t.co/9WqA8I8QgO

Joe Thomas’ Twitter jab was pretty good. However, the Cleveland Browns legend may have opened up a can of worms he didn’t expect.

Thomas played 11 seasons in the NFL, all with the Browns. However, he’s never won a playoff game, let alone even made the postseason.

The Wisconsin product was an iron man for Cleveland. He went 10 consecutive seasons without missing a start. Thomas’ work speaks for itself, with 10 Pro Bowl selections and six All-Pro selections to his name. However, that didn’t stop the Steelers faithful from clapping back at him.

Thomas seems to enjoy getting under the fans’ skins and even addressed never making the playoffs himself.

“I’m still waiting for this to sting,” he said. “Not yet. NFL is binary, you win the Super Bowl, or you don’t. There’s no in-between.”

Joe Thomas walked into the fire, but at least he’s not taking himself too seriously.

Cleveland has bigger fish to fry after disappointing 2021 season

Peyton speaking for.. EVERY HUMAN WATCHING

It’s not surprising that Joe Thomas went after the Steelers. The NFL Network analyst made a career playing physical football against Pittsburgh twice a year. However, as a Cleveland Browns supporter, he should have more important matters on his mind.

The Browns posted an 11-5 record in 2020, the franchise’s best mark since 1994. After adding more firepower in the offseason, Cleveland entered the 2021 season with even higher expectations.

Kevin Stefanski’s squad looked like a potential contender in the AFC. However, Cleveland failed to live up to the lofty goals. The Browns finished with a disappointing 8-9 record, and they enter the offseason with several questions needing answers.

Baker Mayfield will be the team’s biggest storyline throughout the offseason. The 2018 No. 1 overall pick struggled in 2021, mainly due to injuries and inconsistency. He’s entering the final year of his rookie deal. If Mayfield wants to secure a long-term contract, he needs to play better in 2022.

The Steelers weren’t a great football team in 2021, but they were good enough to sweep the Browns. Joe Thomas’ comments were in good fun, but Cleveland’s track record in the postseason doesn’t give him much of a leg to stand on.

Read More
Did you miss our previous article...
https://deals.delivery/sports/toto-wolff-ends-his-attack-on-fia-race-director-and-takes-on-formula-1-reform
thechiefsoffensivelineman