Isiah Thomas Insistently Desired to Overtake an NBA Legend's Iconic Status in a Legendary Detroit Gym. 'All I Wanted To Do Was Get Away from George Gervin and Find St. Cecilia's'

Not only did Isiah Thomas, a Chicago native, grapple with having to be a member of the Detroit Pistons early in his career. He also had to wrestle..

Not only did Isiah Thomas, a Chicago native, grapple with having to be a member of the Detroit Pistons early in his career. He also had to wrestle the Motor City away from Hall of Famer and Detroit native George Gervin.

The Iceman was to Detroit what Magic Johnson was to East Lansing. Aside from being one of the best players in NBA history, Gervin also endeared himself to the local community by showing out at an iconic church gym on Detroit’s west side.

As a kid from the Windy City, Thomas understood the lengths he had to go to in order to surpass Gervin’s iconic status in the Motor City. That included some runs at St. Cecilia’s.

Detroit’s basketball fans could really only fall back on local heroes for much of the 1960s and 1970s. Fortunately, one of their own became one of the sport’s most iconic stars.

George Gervin developed a reputation as one of the purest scorers in basketball in the ABA. That scoring ability translated to the NBA, where Gervin won four scoring titles as a member of the San Antonio Spurs.

The last of those scoring titles came during the 1981-82 season, when Detroit Pistons fans finally had something to be more excited about: a rookie guard named Isiah Thomas.

Zeke’s star shined right from the start. He made the All-Star team in his first season, averaging 17.0 points, 7.8 assists, and 2.1 steals while helping to lead the Pistons to an 18-win year-over-year improvement.

But while Thomas brought a sense of excitement to the Pistons, he and his teammates couldn’t dream of drumming up the same level of excitement as Gervin, especially at the legendary St. Cecilia’s gym.

Thomas recalled the aura around Gervin at St. Cecilia’s 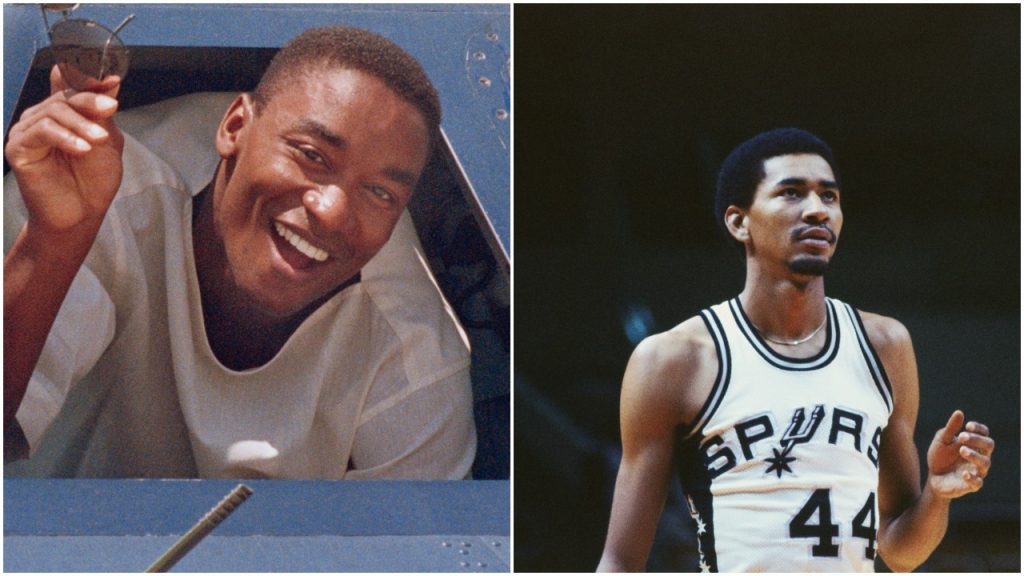 Shortly after being drafted by the Pistons, Isiah Thomas joined George Gervin and Magic Johnson on something of an exhibition tour in parts of Michigan and the American South.

The Iceman worked Zeke during the tour. He also kept alluding to his iconic status at a gym at St. Cecilia’s church on the west side of the Motor City. Thomas was tired of all the talk. He told The Athletic last year that he wanted to play at St. Cecilia’s and experience it for himself.

Thomas would make his way to St. Cecilia’s, likely with the hopes of winning favor with the crowds and becoming the face of basketball in Detroit. But he soon discovered that Gervin’s gravitas was unmatched.

“You could’ve brought anyone in the gym, and no one ever would’ve packed it like George Gervin,” Thomas said, via The Athletic. “What he was to the community and to the neighborhood. So the Pistons would show up, and we were local pros, and we were making our way through the league in terms of championships and all of that, but when George Gervin came home, and he walked into the gym, there was nothing like it. Nothing.”

St. Cecilia’s has drawn comparisons to Rucker Park in terms of venues that established a significant meaning to the history and evolution of basketball. It makes sense, then, that Gervin — a man who revolutionized the NBA with his scoring ability and style — was such a prominent figure there, especially given he is a Detroit native.

But while Gervin was shown unrivaled love and adoration at St. Cecilia’s, Thomas carved out his own lane as a beloved basketball figure in Detroit.

George Gervin eventually faded into the background as Isiah Thomas and the Pistons prepared to take over the NBA.

Gervin spent his final season of professional basketball in Italy during the 1986-87 campaign, when the Pistons pushed the Boston Celtics to seven games in the Eastern Conference Finals. That series became a turning point.

Detroit finally ousted Boston as champions of the East in 1988. Although Thomas and the Pistons came up just short in those NBA Finals against Magic and the Lakers, they went on to capture back-to-back championships and cement their place as one of the league’s best dynasties.

Whether he knew it or not, Gervin’s St. Cecilia stories likely motivated Thomas to build his own legacy in the Motor City. Zeke did just that, becoming the predominant figure in Pistons history and one of the greatest point guards the NBA has ever seen.

RELATED: Isiah Thomas Prompted a Legendary Boston Celtics Announcer to Violate Journalism Ethics Over His Hatred of the ‘Bad Boy’ Detroit Pistons: ‘They Told Me I Shouldn’t Say Bad Things About Isiah, and I Say Why Not?’

The post Isiah Thomas Desperately Wanted to Surpass an NBA Legend’s Iconic Status at a Legendary Detroit Gym: ‘All I Wanted to Do Was Get Away From George Gervin and Find St. Cecilia’s’ appeared first on Sportscasting | Pure Sports.

By: Martin Fenn
Title: Isiah Thomas Desperately Wanted to Surpass an NBA Legend’s Iconic Status at a Legendary Detroit Gym: ‘All I Wanted to Do Was Get Away From George Gervin and Find St. Cecilia’s’
Sourced From: www.sportscasting.com/isiah-thomas-surpass-nba-legend-iconic-status-legendary-detroit-gym/
Published Date: Mon, 25 Oct 2021 19:17:52 +0000

Read More
Did you miss our previous article...
https://deals.delivery/sports/patrick-mahomes-needs-the-chiefs-to-get-creative-and-desperate-if-they-want-to-save-their-nightmarish-season
georgegervinthelegendary