In his first year as an NBC Sports analyst, Dale Earnhardt Jr. covered the fall 2018 event at Martinsville Speedway as a journalist, retired racer, and friend.

Truex remained winless at tracks shorter than one mile at that point in his career. He was in a position to end the skid, but he had to take out Logano.

He didn’t. And Logano did, driving away with the checkered flag and 2018 drivers’ championship following a bump-and-run maneuver.

Martin Truex Jr. proved to be ‘too nice’ to Joey Logano during key Martinsville Speedway moment in 2018

He's led every lap of Stage 2 thus far… can he finally get it done? #TruexJr pic.twitter.com/yaFxL4lGxu

“He’s too nice,” Earnhardt yelled into his microphone, reported by Beyond the Flag. “The 22 (Logano) goes around him on the outside, and Martin never did anything! He just sat there and watched it happen!”

That wasn’t always true for Truex, however. He started 0-for-80 at short tracks, mainly Bristol Motor Speedway, Richmond Raceway, and Martinsville. It took Truex parts of 16 seasons to finally achieve his breakthrough.

Entering NASCAR’s much-ballyhooed 2022 exhibition opener on Feb. 6, the quarter-mile Clash at the Coliseum, Truex has emerged as one of the Cup Series’ top short-track racers.

Believe it or not.

“Honestly, nothing really clicked,” Truex told CBS Sports of his early struggles. “It wasn’t like one thing we did. It was just kind of a work in progress more than anything. …”

Truex displayed his short-track chops with a come-from-behind victory on Sept. 11 anniversary race 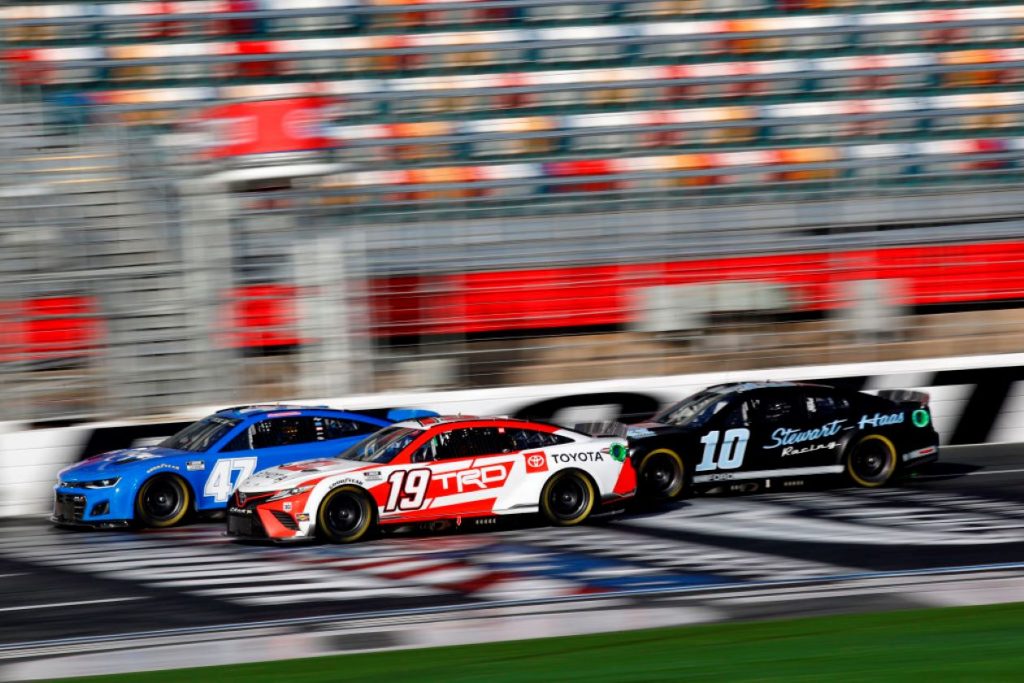 Along with Kyle Busch and Brad Keselowski, Truex is one of the drivers to watch during the Clash. Nestled within the confines of the Los Angeles Memorial Coliseum, a newly constructed track, at the cost of more than $1 million, awaits. It’s the shortest track on the ’22 schedule – by far.

The Clash will be raced on a surface that is one-third the size of .75-mile Richmond, a track Truex has come to dominate with two wins in his past four outings.

On the 20th anniversary of Sept. 11, Truex displayed his new short-track chops by winning after being penalized after his fender inched in front of Denny Hamlin’s machine at the start. Before completing the first lap, Truex fell from the front to the rear.

Sixty laps later, however, Truex forced his way into the top 10. On Lap 269, he took the lead and, aided by a swift pit stop, cruised to an eight-second advantage at one point.

From the lead pack to 37th place to Victory Lane.

On a short track?

Martin Truex Jr. is out of the race after Kyle Busch gets into the back of the No. 78. Here's another angle of that wreck. #NASCAR pic.twitter.com/1bZ4wbmPRp

Truex has re-invented himself over the past three seasons, winning six of the past 15 short-track events. Since last season’s spring race at Martinsville, Truex has totaled five straight top-7 finishes.

If the “nice” competitor continues to pile up points at short tracks, Truex could discover a formula for snapping his recent streak of runner-up finishes. Since Logano’s bump-and-run, he has placed second in the drivers’ standings three times. The outlier was 2020, when he finished seventh.

A non-points race, the Clash will not offer Truex an opportunity to exploit his recent short-track success.

The circuit returns to Richmond on April 3.

RELATED: Kyle Busch and 2 Other Drivers to Watch During the Clash at the Coliseum

Read More
Did you miss our previous article...
https://deals.delivery/sports/trent-williams-49ers-pro-bowler-opens-up-about-trey-lances-quiet-season-he-was-just-old-enough-to-buy-his-first-beer-or-pack-of-cigarettes
martintruexjrtruexjr