How Many Times have the New England Patriots and Buffalo Bills met in the NFL Playoffs.

The New England Patriots and Buffalo Bills will meet for the very first time in an NFL Playoff Game on Saturday night in Orchard Park, NY, as the two ..

The New England Patriots and Buffalo Bills will meet for the very first time in an NFL Playoff Game on Saturday night in Orchard Park, NY, as the two original AFL franchises and divisional rivals throughout their 62-year histories have only met one time in a playoff setting, and that came back in the early days of the American Football Conference.

The Bills had their first real heyday as a regular postseason fixture in the early 1990s, a time when the Patriots were among the worst franchises in the NFL. By the time the Patriots began to emerge as a power in the mid-1990s, then became a Super Bowl-dominating dynasty over the past two decades, the Bills were entering a prolonged decline.

Now, at the start of 2022, the stars have aligned to put the two bitter rivals on a playoff collision course. History is not really a guide from a playoff perspective, but their two regular-season meetings in 2021 could provide some insight into what to expect on Saturday. 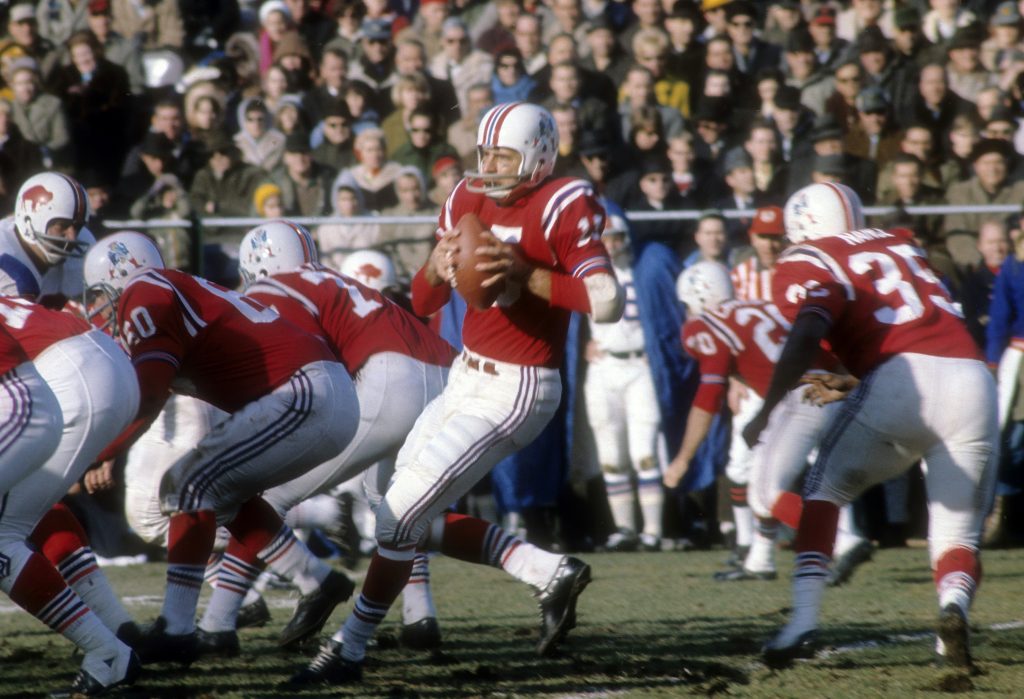 The date was Dec. 28, 1963. The country was still reeling from the assassination of President John F. Kennedy. The Beatles were soon to step foot for the first time on American soil. In the AFL, the Patriots were called the Boston Patriots and their home games were played at Fenway Park.

Both teams finished the regular season with 7-6-1 records, necessitating the first divisional playoff game in AFL history, with the winner to meet the San Diego Chargers in the AFL Championship Game.

The playoff was held at Buffalo’s War Memorial Stadium, which was not only the Bills’ home field from 1960-72, but was the stadium used to film all the baseball scenes in the 1983 movie, “The Natural.”

Both teams were led by quarterbacks who would later appear in Super Bowls for other teams: Daryle “The Mad Bomber” Lamonica for the Bills, who started Super Bowl 2 for the Oakland Raiders, and Babe Parilli for the Patriots, who made a cameo in Super Bowl 3 for the Jets.

The Patriots won 26-8, with Gino Cappelletti kicking four field goals for New England. The beloved Cappelletti would go on to broadcast Patriots games on the radio for 28 years before retiring in 2012. He was also the voice in the background of the famous Boston College radio call of Doug Flutie’s miracle touchdown against Miami in 1984, screaming of Gerard Phelan’s catch, “He got it! He got it!”

DAMIEN HARRIS TURNS ON THE JETS

In what was among the most memorable regular-season games of the 2021 season, the Patriots got the best of the Bills on Dec. 6 amid gale-force winds in Buffalo. The Patriots managed a 14-10 victory in a game that will be best remembered as the night New England rookie quarterback Mac Jones attempted just three passes to set a franchise record. Instead, the Patriots ran for 222 yards and made an early long touchdown run by Damien Harris stand up as the winning score.

But with the Patriots having an opportunity to clinch the AFC East in a Week 16 rematch in Foxboro, it was the Bills who dominated, 33-21, to take control of the division lead. With the weather no longer a factor, Josh Allen threw for 314 yards and three touchdowns. Jones’ late-season struggles continued, as he completed just 14 of 32 passes for 145 yards and no touchdowns.

On Saturday, the two teams meet again for the 3rd time this season.

The weather is expected to be bitterly cold for this Saturday night Super Wild Card game, but without the kind of winds the two teams dealt with back in Week 13.

Playing in front of his home crowd, Allen is in a position to return the Bills to the Divisional Round for the second year in a row, while sending the Patriots to its second straight playoff loss dating back to the 2019 season, and effectively ending their two decades of dominance. It would be the kind of statement the Bills need to send to assert themselves as the new true leader in the division.

It’s hard to say if it will happen on Saturday. In the Bill Belichick era, the Patriots are 4-4 in playoff road games. But this will be their first with a quarterback not named Tom Brady.

RELATED: Bill Belichick Cements Coach of the Year Case With Beautifully Ugly Win Over Bills That Only He Can Appreciate

The post How Many Times Have the New England Patriots and Buffalo Bills Met in the NFL Playoffs? appeared first on Sportscasting | Pure Sports.

By: Jeff Goldberg
Title: How Many Times Have the New England Patriots and Buffalo Bills Met in the NFL Playoffs?
Sourced From: www.sportscasting.com/how-many-times-have-new-england-patriots-buffalo-bills-met-nfl-playoffs/
Published Date: Thu, 13 Jan 2022 17:59:03 +0000

Read More
Did you miss our previous article...
https://deals.delivery/sports/brooklyn-nets-positivity-in-chicago-brooklyn-nets-tantalizingly-tease
nflplayoffsbuffalobills