As the NFL season is set to kick off with a Thursday night game between the Dallas Cowboys and Tampa Bay Buccanneers on Sept. 9, fantasy football..

As the NFL season is set to kick off with a Thursday night game between the Dallas Cowboys and Tampa Bay Buccanneers on Sept. 9, fantasy football managers are finalizing draft boards, running through mocks, and preparing their teams for a title run. A large part of that preparation and research comes in finding late-round sleepers who can give teams an advantage. After locking down the best running backs and wide receivers, a managers’ next step is to find the best flex position players to fill out a roster.

A flex spot in a traditional 10- or 12-team league gives teams the ability to start three running backs or three wide receivers each week, depending on matchups. Some leagues allow tight ends at the flex position, but a wide receiver or running back with a favorable matchup will almost always outscore a tight end.

So after the best running backs and best wide receivers go off the board, what players ranked lower in each position could end up being sleepers for the flex spot in 2021?

What traits should managers look for in a flex position player? 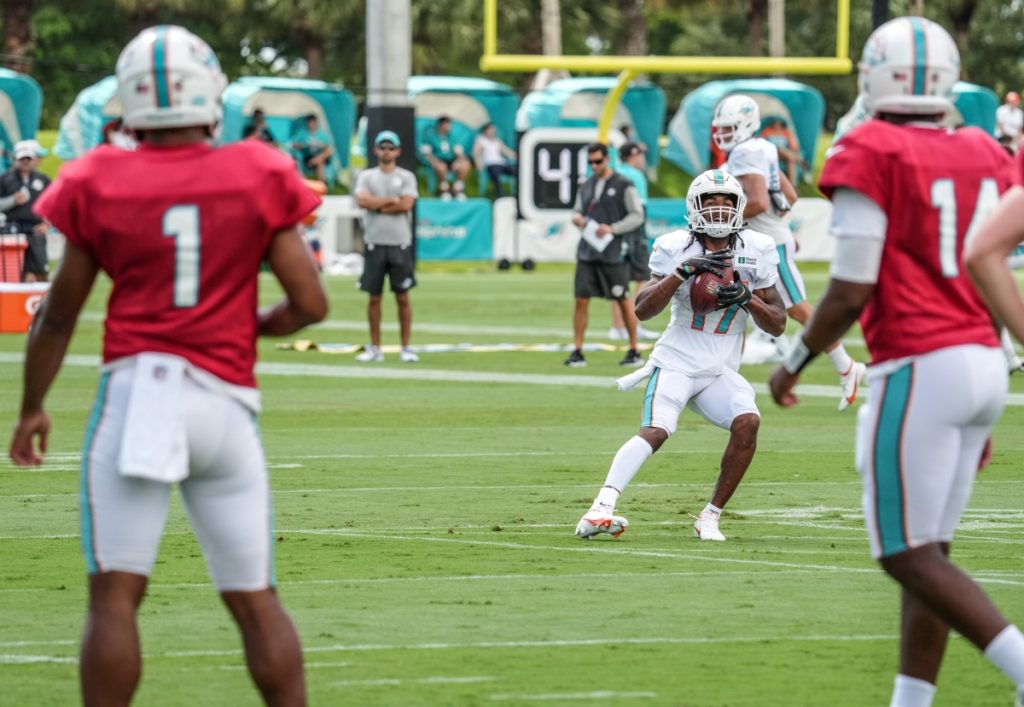 The best flex position players usually end up being drafted in a “best player available” scenario. If a team is already stacked with two of the best running backs, sometimes a third back is a better choice than a less productive wide receiver, or vice versa. Having the option to start a third player from either of the two positions gives managers more flexibility; hence, the “flex” position.

This usually plays out best in a points per reception (PPR) format. In a PPR league, any receiver or running back that can pull down a handful of catches each week is a good play at the flex spot. In addition to the production a team can get out of its RB1 and RB2 — or WR1 and WR2 spots — a pass-catcher from either position is a solid play at flex.

For non-PPR managers, the dreaded touchdown vulture is a good choice. If a running back gets carries inside the red zone, an extra six points from an RB3 can be a big boost.

Who are some of the best flex position players heading into 2021?

Most by an undrafted rookie in NFL history

Flex player rankings can depend on different factors, including weekly matchups and how a draft plays out. After the first few highly-ranked receivers or running backs come off the board, managers can start looking at grabbing a third of either. In a 10-team PPR league, it’s a safe assumption that the first 15 players or so at each position will go off the board in the first few rounds. That’s when it’s time to start looking at drafting a possible flex starter.

The best wide receivers, though, often make for the best flex players in PPR formats. Unfortunately, the receivers who see the most targets often get drafted as a WR1 or WR2. There are options to be found later, though. Pittsburgh’s Dionte Johnson received the sixth-most targets in the NFL in 2020, but his ECR is 20th at the position. Similarly, Carolina’s Robby Anderson was targeted 136 times last season but is ranked 30th ERC. Deeper down the rankings are options like Houston’s Brandin Cooks and Jacksonville’s Leviska Shenault Jr, who could also see a few carries on jet sweeps in Urban Meyer’s offense. The Browns’ Jarvis Landry has always been a good PPR receiver.

Who are some of the top flex sleepers this year?

Managers will have to dig deeper down the wide receiver and running back rankings to find flex sleepers, but they pop up every season.

In terms of wideouts, the Chargers’ Mike Williams has a world of talent and a good quarterback in Justin Herbert, and his ECR at the position is 45. The Dolphins’ Devante Parker caught 63 passes and was targeted more than 100 times last year. His ECR at the receiver spot is 48. A rookie like Jaylen Waddle is a boom-or-bust prospect but is set to play alongside his old college quarterback in Tua Tagovailoa. Miami’s QB’s trust in a familiar wide receiver could make for a good amount of targets.

At running back, the Colts’ Nyheim Hines was third in the NFL in terms of targets and is set to be Indy’s third-down back behind Jonathan Taylor. Buffalo’s Devin Singletary caught 38 passes and ran for almost 700 yards in 2020.

In certain seasons, a star at the flex position can make or break a league. Managers who can start three of the league’s top-scoring running backs have an advantage over other teams — ditto for those with top-scoring receivers. If a fantasy team can get legitimate production from the flex spot, it could be poised for a postseason run, if not better, in the last few weeks of the season.

RELATED: The Jacksonville Jaguars’ Travis Etienne Could Vault to RB1 Status for the 2021-22 Fantasy Football Season