Through the first several games of the 2021 NFL season, the Dallas Cowboys looked legitimate. Led by Dak Prescott and a high-powered group of elite..

Through the first several games of the 2021 NFL season, the Dallas Cowboys looked legitimate. Led by Dak Prescott and a high-powered group of elite wide receivers, the Cowboys were blowing out teams with ease. After years and years of waiting, the Cowboys finally looked like Super Bowl contenders.

The Cowboys coasted to a 12-win season, capped off by a ruthless beating of the Philadelphia Eagles during Week 18. It was a great year for Dallas from top to bottom. All they needed to do was continue their run of good form into the postseason.

However, in typical Cowboys fashion, they wilted at the first sign of trouble.

Dak Prescott, Cowboys put up a lousy effort during the Wild Card Round

Dak Prescott scrambles and instead of handing the ball to the referee, he hands it to the center which runs the clock out. And that is how the #Cowboys season ends. I am mind blown

The Cowboys entered the Wild Card Round as favorites over the San Francisco 49ers. However, once the game started, they looked like anything but favorites to move on.

The 49ers jumped out to a quick lead, only letting Dallas back into the game during the fourth quarter due to some questionable decision-making by quarterback Jimmy Garappolo. The Cowboys were gifted one final shot to avoid embarrassment at home against a lesser opponent, yet they still couldn’t capitalize.

A moment that’s become wildly criticized around the NFL over the past several days, the Cowboys drew up a designed QB draw with 14 seconds left on the game clock and no timeouts. Prescott failed to get the ball set in time, and the clock hit zero. Dallas lost 23-17, never giving themselves a proper chance to tie things up during the closing moments. 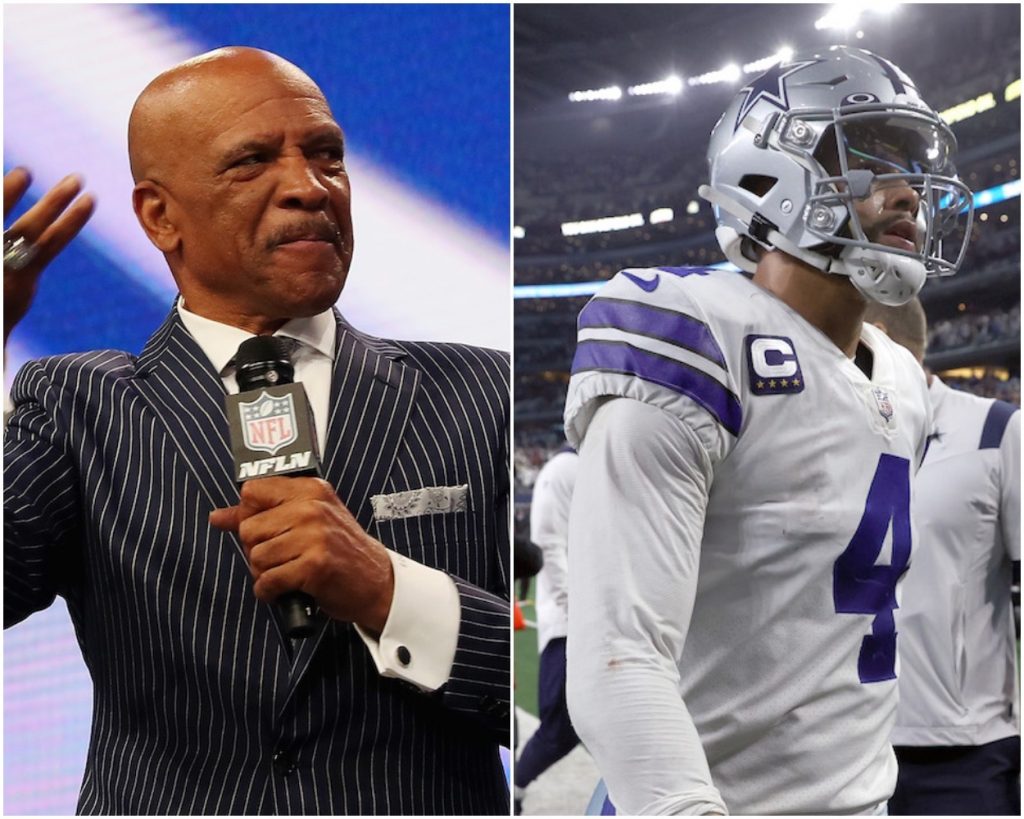 The final play-calling blunder has become the focal point for many frustrated Cowboys fans. However, it’s essential to acknowledge that Prescott and the offense, in general, didn’t have a good afternoon.

Prescott completed just 23 of his 43 pass attempts for 254 yards. He threw one interception to go along with his one touchdown. Prescott also struggled to get the ball to one of his top targets in CeeDee Lamb. The former first-round pick only had one catch the entire game.

The decision to run a QB draw with no timeouts was horrible, but Prescott’s overall play wasn’t that much better, and that’s where legendary Cowboys WR Drew Pearson’s mind is at. When asked about the Cowboys’ failure of a season on The Zach Gelb Show, he blamed Prescott.

“I’m just wavering now with Dak,” Pearson said. “I saw regression as the season went on — that’s a disappointment at $40 million a year. It’s not about the money. It’s about that player playing the position and not improving, declining in a year where we started out so well … We almost had the NFC East won in the first seven weeks. Then we started going downhill. A lot of it was on the offensive side of the ball, and a lot of it was predicated by the play of the quarterback.”

Pearson is one of the best wide receivers in Cowboys history and a Hall of Famer. Him openly criticizing Prescott is a big deal.

Up to this point, Prescott has been a fan-favorite in Dallas and around the NFL. A former third-round pick who overcame all odds to become the franchise QB for one of the most prominent organizations in sports, it’s been hard not to root for him.

However, following this past weekend’s lousy performance (and subsequent blaming of the officials), the narrative is beginning to change.

No longer is Prescott the feel-good, smiley quarterback that everyone likes. His cap hit balloons up to $34.4 million next season. He’s being paid like a superstar without the superstar-type results.

As harsh as his comments may sound, it’s hard to disagree with Pearson. Prescott has been a disappointment as of late.