DeMar DeRozan Accuses Not Having Cable As a Kid for His Play Style: "That's Who My Gravitated To Early On"

Some kids who didn’t have cable growing up would often just watch PBS on the antenna or pop in a movie. DeMar DeRozan, on the other hand, used the..

Some kids who didn’t have cable growing up would often just watch PBS on the antenna or pop in a movie. DeMar DeRozan, on the other hand, used the one channel he had to help himself eventually become one of the best NBA players around.

Sure, DeRozan probably worked tirelessly at various gyms and courts as a kid. But he also watched one legendary player on his only channel and ultimately modeled his game after him.

That legendary player was Kobe Bryant. 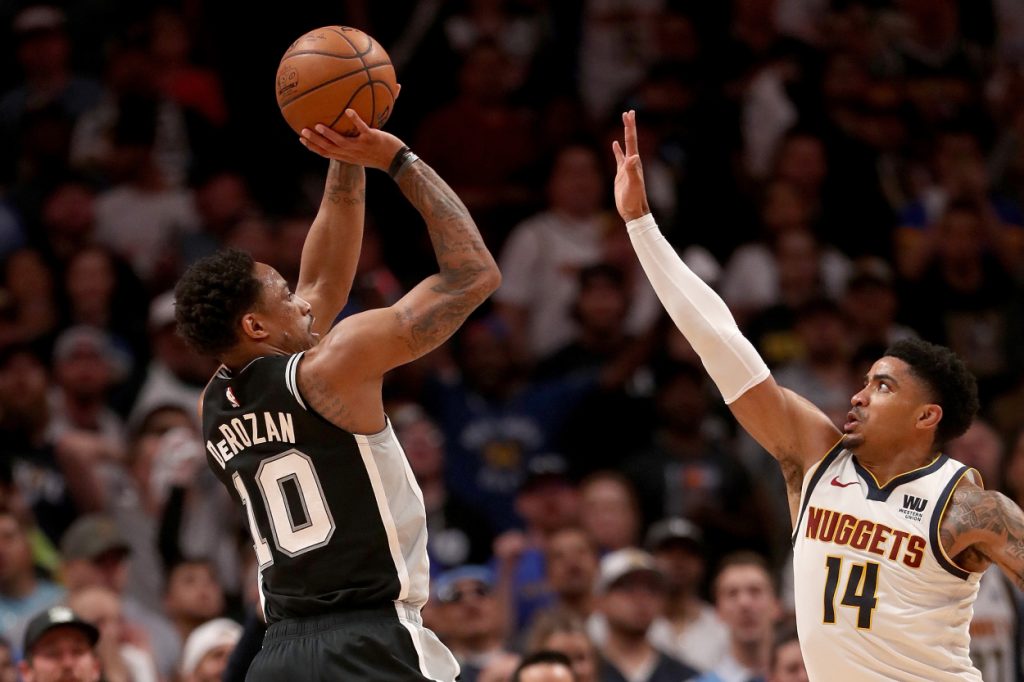 DeMar DeRozan of the San Antonio Spurs during Game 2 of a first-round NBA playoff series on April 16, 2019. | Matthew Stockman/Getty Images

Throughout his career with the Toronto Raptors and San Antonio Spurs, DeMar DeRozan has been one of the NBA’s best players. He’s a four-time All-Star and two-time All-NBA honoree. He has also scored 20.1 points or more in every season since 2013-14, and dropped as many as 27.3 per game in 2016-17.

No, DeRozan isn’t as lethal of a scorer as the late Kobe Bryant was during his legendary career, as Bryant led the NBA in scoring in two different seasons. He also dropped as many as 35.4 points per game in 2005-06, and averaged 25.0 points for his career overall. But DeRozan’s game is still somewhat similar to Bryant’s.

Bryant did most of his work from mid-range; close to 57% of his shots came from between three feet out and just inside the 3-point line. DeRozan’s shot selection is similar, as close to 69% of his attempts are from the same distance.

So, is DeRozan’s game modeled after Bryant’s on purpose?

Prior to entering the NBA, DeRozan was born and went to high school in Compton, California. He then went to college at USC, so all he saw growing up was Los Angeles Lakers basketball.

And the only channel he had was the one their games aired on.

“That was the only games I could watch on TV growing up in LA,” he said on the July 26 episode of Club Shay Shay. “[It] was the only channel we had. So, when I was seven years old, watching Kobe as a rookie, that was who I could consistently watch. So, whenever I watched him, I imitated whatever he did [when I was] a kid on an imaginary court, in the room, whatever. … Just watching him and having the opportunity to watch him even though we didn’t have cable, that’s who I gravitated to early on.”

It all worked out for DeRozan, as he’s now one of the players other kids try to model their games after.

But given that his career overlapped with Bryant’s, what was it like to play against his idol?

He said Kobe had a ‘godly’ aura

DeRozan entered the NBA in 2009 with the Raptors, the same season Bryant won his fifth and final championship. Bryant then played in the league through the 2015-16 season, which was DeRozan’s second All-Star campaign.

However, DeRozan got to play with Bryant in some pickup games as a teenager at a local college in LA, so he was already used to hooping with him once he got to the league. But there was still a different type of feeling DeRozan felt whenever he played against the Lakers legend.

“It was surreal,” he said on Club Shay Shay. “There’s only two people I’ve ever been around that had that type of aura where [it’s like] godly; it was him and [Michael] Jordan. It was them two people, I swear.”

He continued: “By the time I got to the league, I kind of knew what to expect, but it was definitely a different atmosphere.”

Bryant may sadly be gone, but the way DeRozan talks about him and plays his game like him proves that Kobe’s impact on the sport is just as strong as ever.

RELATED: Kobe Bryant’s 1 Answered Text Led to Him Forming a Close Bond With a Former NBA Star and His Daughter: ‘You Love Mine, I Love You’

The post DeMar DeRozan Says His Style of Play Is a Direct Result of Not Having Cable as a Kid: ‘That’s Who I Gravitated to Early On’ appeared first on Sportscasting | Pure Sports.

By: David Wysong
Title: DeMar DeRozan Says His Style of Play Is a Direct Result of Not Having Cable as a Kid: ‘That’s Who I Gravitated to Early On’
Sourced From: www.sportscasting.com/demar-derozan-style-of-play-direct-result-not-having-cable/
Published Date: Tue, 03 Aug 2021 18:13:17 +0000