Antonio Brown dominated headlines all week after abruptly leaving the Tampa Bay Buccaneers‘ sideline during their Week 17 game against the New York..

Antonio Brown dominated headlines all week after abruptly leaving the Tampa Bay Buccaneers‘ sideline during their Week 17 game against the New York Jets. It was one of the most bizarre NFL moments in recent memory. Many people in NFL circles gave instant reactions to the situation, and Hall of Fame defensive tackle Warren Sapp recently weighed in on the shocking events. 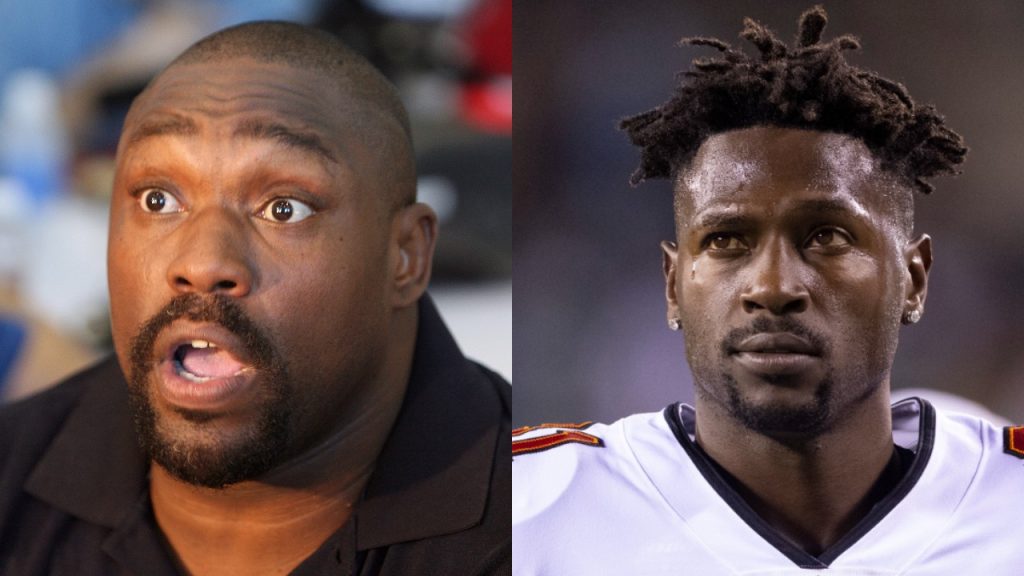 Warren Sapp played 13 NFL seasons, including nine with the Tampa Bay Buccaneers. He still has ties to the organization, and he’s not ashamed to admit he has a rooting interest.

The four-time All-Pro selection recently joined The Rich Eisen Show to discuss everything that transpired with Antonio Brown on the Bucs’ sideline.

“My mouth hit the floor,” said Sapp. “I hit somebody with the team, and I got the greatest response I could ever get back: ‘I guess we got an extra seat on the way home.'”

The Hall of Famer didn’t reveal his source, but he certainly got a kick out of the response as he burst out into laughter.

“That’s the word I got,” said Sapp. “Here we go. Let’s go play football. We’re down 14 in the third quarter with two or three minutes left. I mean, he looked pretty healthy running off that day.”

Sapp didn’t want to speculate too much, but AB’s dramatic midgame exit undoubtedly floored him.

AB and the Buccaneers are at odds

The Tampa Bay Buccaneers officially released Antonio Brown. However, the saga seems to be far from over.

Since the events that occurred in the win at MetLife Stadium, rumors have been swirling surrounding what led to Brown tossing his shoulder pads and leaving the field shirtless.

AB has gotten his lawyer involved, and his camp has continued to release more of his side of the story as the days pass.

Brown battled an ankle injury, which caused him to miss practice during the week leading up to the Jets game. He appeared good enough to go. However, his team claims that head coach Bruce Arians tried to force AB to continue playing on the injured ankle against his wishes.

Arians addressed the media and refuted Brown’s account that he complained of his injury. Instead, the coach suggested the blowup was over a lack of targets.

Brown has since released a series of text messages and continues to be active on social media. While he’s no longer with the team, this situation could potentially cause a distraction as the Buccaneers gear up for the NFL playoffs.

Tom Brady and the Tampa Bay Buccaneers have battled adversity throughout the 2021 NFL season, but the loss of Antonio Brown could certainly prove costly.

The Bucs are currently without several key players heading into the final week of the regular season.

Pro Bowl wideout Chris Godwin suffered a season-ending knee injury in the Week 15 loss to the New Orleans Saints. Running back Leonard Fournette and linebacker Lavonte David are on injured reserve. Pass-rushers Jason Pierre-Paul and Shaquil Barrett have each missed time recently, and Richard Sherman is dealing with an Achilles injury.

The unfortunate situation with Brown just makes matters worse for Tampa Bay. Losing two of the team’s top receivers will force Bruce Arians and company to rely on unproven weapons in the postseason.

Mike Evans is back in action, but opposing defenses will likely key on him and try to make the rest of the receivers beat them. Rob Gronkowski should play a significant role down the stretch given his strong relationship with Brady.

Meanwhile, Tyler Johnson, Scotty Miller, Breshad Perriman, and Cyril Grayson should see increased usage. It should be interesting to see who steps up for the Buccaneers offense.

You can’t ignore or doubt the greatness of Tom Brady in big games. Still, it would be foolish to downplay the void left by Antonio Brown.

Read More
Did you miss our previous article...
https://deals.delivery/sports/the-broadcaster-who-made-an-insensitive-remark-about-kevin-porter-jr-lebron-called-him-out-and-he-issued-an-apology
antoniobrowntampabaybuccaneers