Ben Roethlisberger's Play Doesn’t Look to Impress a Hall of Famer who believes the Steelers have no chance of winning a championship with him: "They’re Going Nowhere"

The Pittsburgh Steelers surprised everyone in Week 1 of the 2021 NFL season when they beat the high-powered Buffalo Bills. In Week 2, though, the Las ..

The Pittsburgh Steelers surprised everyone in Week 1 of the 2021 NFL season when they beat the high-powered Buffalo Bills. In Week 2, though, the Las Vegas Raiders brought them back to reality with a convincing 26-17 win.

Statistically, Ben Roethlisberger has been OK so far this year, but he hasn’t been dominant by any stretch of the imagination. In fact, the quarterback’s play has Pro Football Hall of Famer Michael Irvin feeling uneasy about the Steelers’ chances moving forward.

The Raiders extend their lead over the Steelers. pic.twitter.com/eU5LWo8xz1
(via @NFL)

The Steelers surprised everyone in Week 1 by defeating the Buffalo Bills, who went to the AFC Championship Game last season, 23-16.

Ben Roethlisberger and the offense didn’t help much in the win, though, as the six-time Pro Bowler only threw for 188 yards and a touchdown, and Pittsburgh racked up just 252 total yards. The offense also only reached the end zone once before a blocked punt led to the team’s other TD.

However, in Week 2, the Steelers’ defense couldn’t mask the team’s offensive woes, and Pittsburgh lost to the Las Vegas Raiders 26-17. The Raiders outgained them in total yards, 425-331, and Pittsburgh only ran for 39 rushing yards. Roethlisberger was better statistically, completing 27-of-40 passes for 295 yards, one touchdown, and an interception, but he was hard on himself after the game.

“It’s frustrating because I put a lot of stinkin’ time in, more than I probably ever have,” the quarterback said after the loss, per ProFootballTalk. “I’m not really sure. We’ve got to get it figured out, though, because I’m frustrated that I’m not playing well enough.”

But whether his stats were better or not, Roethlisberger — who is also working through a pectoral issue, per ESPN — certainly isn’t the same player he used to be; he’s 39 years old and can’t make the throws he did a few years ago. In fact, last year, the Miami of Ohio product averaged 6.3 yards per attempt, and this year so far, he’s averaging 6.7 per throw. From 2016–2018, he averaged 7.6, and going back a little further in 2014 and 2015, he averaged 8.3.

So, given Big Ben’s inability to make the plays he used to make, Michael Irvin recently had some strong criticism for him and the Steelers.

Former Dallas Cowboys wide receiver Michael Irvin is almost always opinionated. And while recently appearing on ESPN’s First Take, he shared the concerns he has for a Steelers team with Ben Roethlisberger as its quarterback.

“There’s nothing worse than being in that game unsure, trying to muster up the same things that you used to have inside of you like Big Ben standing in the pocket with people at his feet and still letting that ball go,” Irvin said on the Sept. 20 episode. “We remember all them great days and the great things Big Ben did … but now those throws are interceptions because he thinks he can still do it, but your body can’t do it.”

Irvin then essentially said the Steelers have no chance at winning a championship with Roethlisberger as their quarterback, especially given the fact that their run game has struggled so mightily. They need someone who can cover up their deficiencies, and Big Ben is no longer the type of guy who can do that. 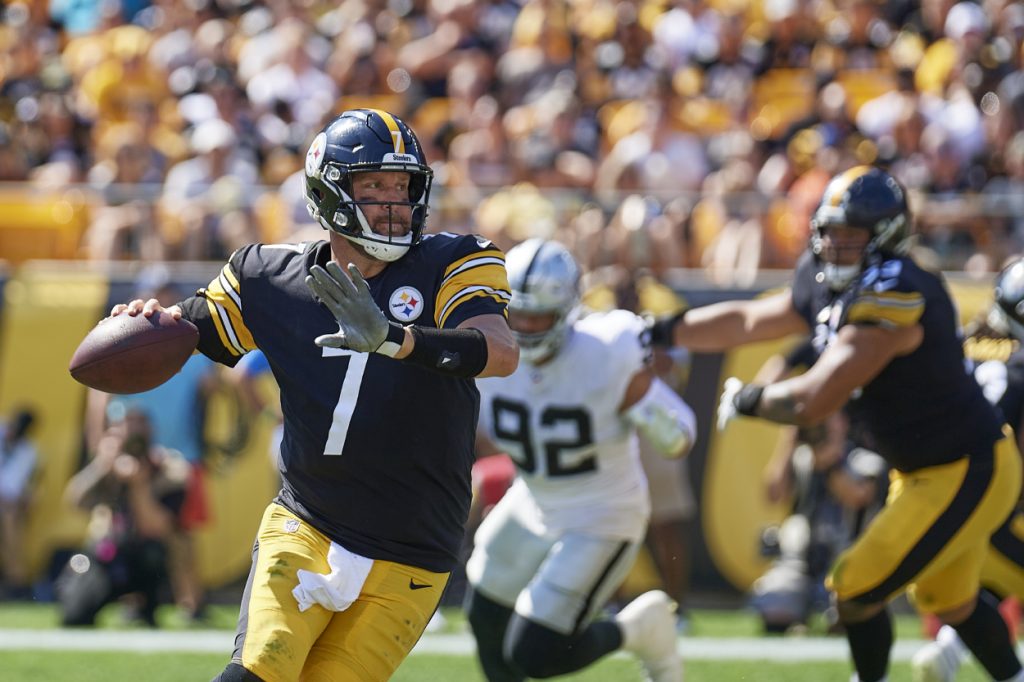 Although Irvin doesn’t think Ben Roethlisberger can lead the Steelers to another championship, he admitted they don’t have a better option right now.

While Roethlisberger is 39 years old and a future Hall of Famer, his backups are the opposite: unproven.

Sure, either Rudolph or Haskins may have the potential to be decent QBs eventually, but they’re not going to help the Steelers win a title now, similar to Roethlisberger. So, as Irvin said, the aging star is just likely their best option.

The Steelers have had stability at quarterback for years, but sooner rather than later, they may need to figure out who their future is so they can actually contend for Super Bowls.

RELATED: Terry Bradshaw Felt His Entire Life Changed During a ‘Monday Night Football’ Game He Didn’t Even Play In

The post Ben Roethlisberger’s Play Doesn’t Appear to Be Impressing a Hall of Famer Who Believes the Steelers Have No Chance at Winning a Championship With Him: ‘They’re Going Nowhere’ appeared first on Sportscasting | Pure Sports.

By: David Wysong
Title: Ben Roethlisberger’s Play Doesn’t Appear to Be Impressing a Hall of Famer Who Believes the Steelers Have No Chance at Winning a Championship With Him: ‘They’re Going Nowhere’
Sourced From: www.sportscasting.com/ben-roethlisberger-play-doesnt-impressing-hall-famer-steelers-no-chance-championship/
Published Date: Tue, 21 Sep 2021 19:32:29 +0000

Read More
Did you miss our previous article...
https://deals.delivery/sports/lakers-make-nba-history-by-renting-25-square-inches-of-real-estate-for-100-million
playoffseasonpuresports