Alvin Kamara launches his Cereal Brand. Lesson for young players to develop skills outside of football

One of the most electric players in the NFL, New Orleans Saints star running back Alvin Kamara is known for making big plays on the field. He’s..

One of the most electric players in the NFL, New Orleans Saints star running back Alvin Kamara is known for making big plays on the field. He’s making noise off the field as well.

In June, Kamara joined the NASCAR team as its first-ever Growth and Engagement Advisor. He attended his first race in 2020 and has been a fan of racing ever since. The partnership was created to help grow the sport and its fan base.

The four-time Pro Bowler is already on to his next business venture.

Excited to announce that my cereal Kamara’s King Crunch is AVAILABLE NOW @rousesmarkets, online at https://t.co/lvjDh8chLJ and will be on campus @alumnihallut & @utvolshop this weekend. Proceeds from each box sold will benefit the @cb_neworleans

Kamara’s King Crunch is a honey, oat and, flakes-style cereal, with the cereal box featuring Kamara himself. The box is Mardi Gras-themed, which comes as no surprise for New Orleans’ favorite running back.

A portion of the proceeds from cereal sales will benefit the Children’s Bureau of New Orleans, whose mission is to improve the mental health, wellness, and overall quality of life of those who live in the community. It focuses on grief and trauma intervention in efforts to reduce stress and depression for families who call New Orleans home.

This new endeavor means a great deal to the Norcross, Georgia, native, per the New Orleans Saints team website.

I’m very excited about creating my own cereal box. I get to live out a childhood dream and help support the incredible work that the Children’s Bureau of New Orleans is doing to bring mental wellness resources to kids and families in the city. 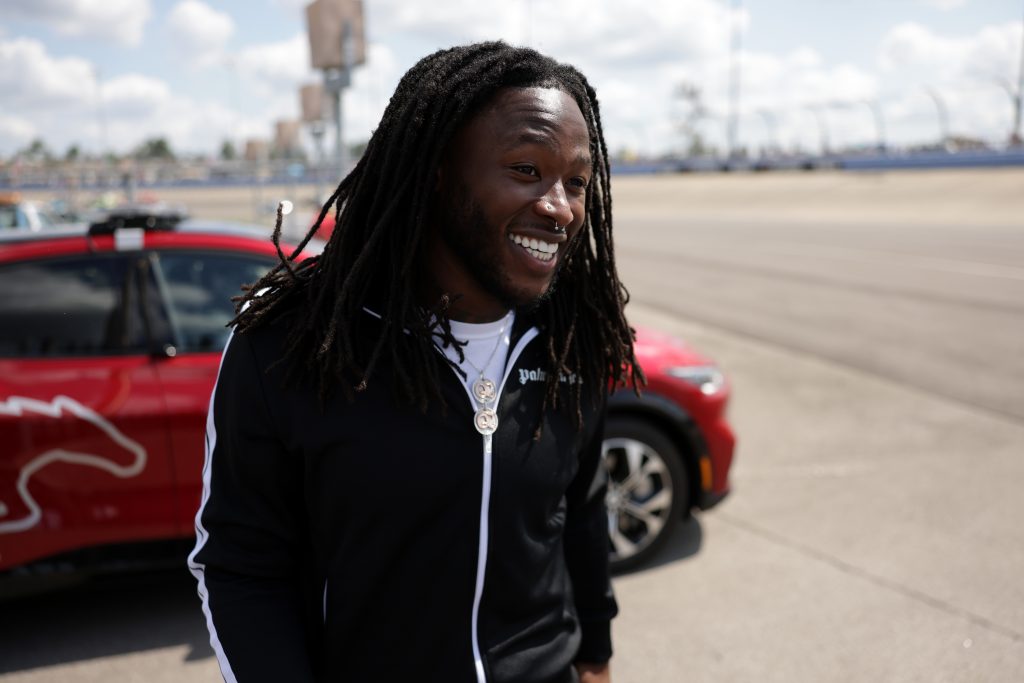 Beyond NASCAR and the cereal, Kamara is also the proud owner of a juice bar in New Orleans.

“The Big Squeezy,” a play on the city’s nickname, provides pressed juices, smoothies, cleansing waters, and healthy bowls. Their goal is to promote healthy habits through proper nutrition and cleansing.

“I’ve been juicing since college,” Kamara told KLFY in New Orleans. “It’s something I do in my every day life. And being able to give New Orleans a healthy option. You get all the nutritional value out of these juices.”

Looking at his efforts, it’s apparent he loves the city of New Orleans. They have welcomed him with open arms since he joined the Saints in 2017.

“The Big Squeezy” also sponsored one of the cars at the NASCAR Xfinity Series season opener at Daytona International Speedway.

Many athletes have mishandled finances over the course of their careers. Kamara does not want to endure those same hardships. He spoke with former NFL player Andrew Hawkins on UNINTERRUPTED‘s “Kneading Dough” segment.

The SEC product did not grow up wealthy. His mother worked hard to provide for him and his older siblings. “I’ve always known the value of a dollar,” said Kamara. “My experiences with money motivated me to make it in the league.”

In the interview, he advised he actually doesn’t touch any of his NFL salary but instead only spends his income from endorsement deals.

Right now I’m way more interested in keeping my money than spending it. I’m saving my money because I know that with money in your hands, you have the power to control your life.

Becoming a professional football player is a goal for many young athletes. The odds of reaching the NFL are slim, and only the elite make a career of it. Alvin Kamara is one of those elite but still has made it a priority to set himself up for success after football. He understands everything could be gone in the blink of an eye.

In becoming a well-rounded individual, he has developed the necessary tools to create a future for himself and his family.

RELATED: Alvin Kamara Signed a $3.85 Million Contract and Spent Less on Bling Than He Did on Wings

The post Alvin Kamara Launching His Cereal Brand is Lesson for Young Players to Develop Skills Outside of Football appeared first on Sportscasting | Pure Sports.

Read More
Did you miss our previous article...
https://deals.delivery/sports/kareem-abduljabbar-is-a-living-nba-legend-but-he-doesnt-care-about-being-crowned-the-goat-there-is-no-such-thing