Now-former Los Angeles Lakers guard Alex Caruso has written quite the story for himself over the last few years. Undrafted out of Texas A&M in 2016,..

Now-former Los Angeles Lakers guard Alex Caruso has written quite the story for himself over the last few years. Undrafted out of Texas A&M in 2016, the College Station native went from the Summer League with the Sixers to the D-League (now G League) with the Thunder and then back to the Summer League with the Lakers. He became the first player in history to jump directly from the D-League to the NBA via two-way contract, worked his way into a multiyear, multimillion-dollar deal, and less than a year ago, Caruso started the clinching game of the NBA Finals, a game the Lakers obviously won.

But the next chapter of his story won’t be in Hollywood, but instead in the Windy City as he’s signed a four-year deal with the Chicago Bulls, a contract that will actually pay him more than what Scottie Pippen earned during his entire run with the franchise.

As the NBA free agency period approached, it was thought that multiple teams would be interested in signing Caruso, and that was apparently the case. While the 6-foot-4, 186-pound guard may never be a major offensive threat on a consistent basis (he holds career averages of 5.9 points and 2.9 assists), Caruso is always good for a few buckets off the bench and is a terrific perimeter defender, even getting some All-Defensive Team votes in the past. And he’s also one of those guys that has no problem doing the little things that may not show up on the stat sheet and brings unparalleled energy to the court every time he checks in.

While some thought he might remain with the Lakers (more on that in a minute), the Bulls swooped in and grabbed him to the tune of four years and $37 million, reuniting him with former teammate Lonzo Ball, who also received a four-year deal as part of a sign-and-trade with the Pelicans. 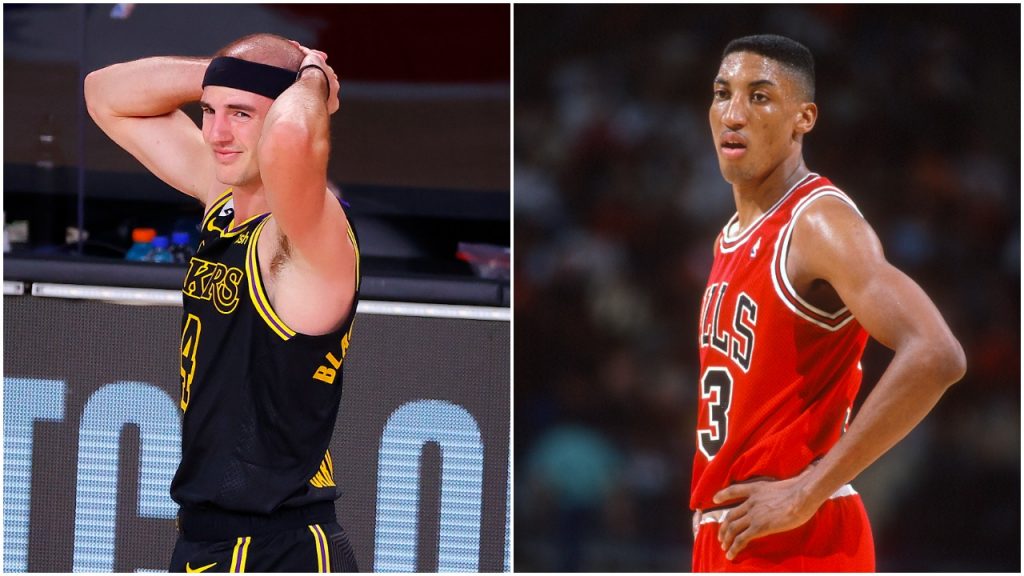 At $37 million over four years, Caruso will earn an average of $9.25 million per season with the Bulls. To put that in perspective, Michael Jordan only made that much money (on the court) in two of his 15 NBA seasons. And while Scottie Pippen exceeded that amount with the Rockets and Blazers, he never made that much during any of his dozen seasons in Chicago.

And in those same dozen seasons, Pippen made a combined total of $32,530,700, nearly $4.5 million less than Caruso will make over the next four years. So that just goes to show how inflated NBA salaries are these days.

Will never forget my time in LA and the #lakeshow fans.. y’all loved me before it was cool

genuine love for all of y’all

As mentioned in the intro, it was thought by some that Caruso might stay with the Lakers as he’d become a fan favorite in LA. And as they held his Bird Rights, the Lakers could have paid him whatever they wanted. But seeing as the franchise now has to pay the mammoth salaries of LeBron James, Anthony Davis, and Russell Westbrook, a big deal didn’t seem overly likely. According to The Athletic, Caruso’s team went to the Lakers once the Bulls made their offer but were told LA would not counter.

And thus begins the next chapter in the Alex Caruso story.

RELATED: Scottie Pippen Actually Made More Money in the NBA Than Michael Jordan

The post Alex Caruso Will Make More Money in Four Years With the Bulls Than Scottie Pippen Made in a Dozen Years in Chicago appeared first on Sportscasting | Pure Sports.

By: Luke Norris
Title: Alex Caruso Will Make More Money in Four Years With the Bulls Than Scottie Pippen Made in a Dozen Years in Chicago
Sourced From: www.sportscasting.com/alex-caruso-will-make-more-money-four-years-bulls-than-scottie-pippen-made-dozen-years-chicago/
Published Date: Tue, 03 Aug 2021 19:28:10 +0000