The New York Giants are off to an abysmal start to the 2021 NFL season. On a special day for the franchise, the team let yet another win slip through ..

The New York Giants are off to an abysmal start to the 2021 NFL season. On a special day for the franchise, the team let yet another win slip through its grasp. Now 0-3 to begin the season, Giants fans are voicing their displeasure. The crowd met owner John Mara with a barrage of boos, which signals that some long-overdue changes need to happen. Saquon Barkley inexplicably defended him.

The Giants honored longtime quarterback Eli Manning at halftime of the team’s Week 3 game against the Atlanta Falcons. The organization retired Manning’s No. 10 jersey and inducted the two-time Super Bowl champion into the Giants Ring of Honor.

With all eyes on the Giants, they faltered under pressure. They led Atlanta 14-7 heading into the fourth quarter, then relinquished 10 unanswered points. A Younghoe Koo game-winning field goal put the Giants out of their misery.

New York’s inability to finish games has haunted them throughout the Daniel Jones era. They accumulated more yards on offense and won the time of possession battle, but even that was not enough. Something has to give at some point.

After contending in the lowly NFC East in the 2020 season, the Giants have dropped three straight to beatable teams to begin 2021. The schedule only gets harder from here, as their next two games are against the Dallas Cowboys and the New Orleans Saints.

New York’s 2021 season could get out of hand quickly.

Saquon Barkley defended John Mara after he was booed 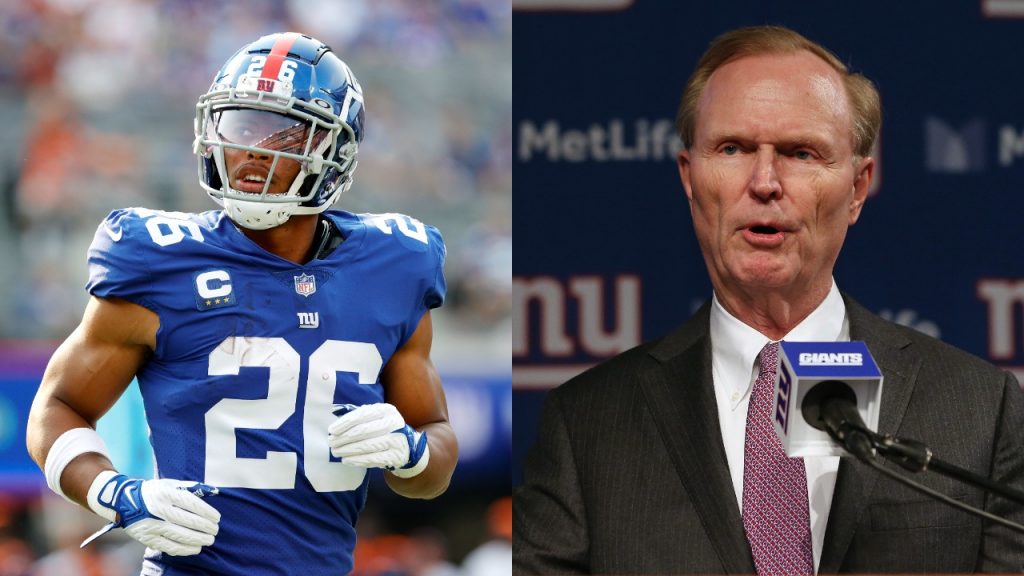 Eli Manning’s halftime retirement ceremony was supposed to be a joyous occasion filled with positivity, but things turned sour once Giants owner John Mara took the mic to say a few words.

The fans in the stands apparently didn’t care to hear anything Mara had to say, as they bombarded him with loud boos, according to ESPN. Not only were the Giants trailing at the half, but now, the owner, who seemingly is part of the problem, had the nerve to give a speech.

Mara gave his response after the ceremony ended, and he understood the frustration. “I would boo, too,” he said. “We’re 0-2 and down at the half.”

It sounds as if the owner doesn’t exactly get it. The issues extend well beyond three games in 2021. Still, one of his star players spoke out in his defense.

Saquon Barkley reached the end zone against the Falcons, which was one of the lone bright spots of the loss. He chimed in on Mara being booed by the fans.

“I don’t think that is fair to Mr. Mara,” said Barkley. “He’s done a great job.” It’s unclear how genuine that comment was, considering the team’s ineptitude for the past four seasons.

Not even the star running back can save John Mara from the scrutiny, which will continue for the rest of the 2021 season.

Time is up for the Giants to win, according to the fans

Wow! John Mara getting booed as he speaks at the Eli Manning retirement ceremony. Speaks to the current state of the team. #Giants

The Giants franchise has a storied history, having won eight championships since their inception. However, mediocrity has been the product since 2017.

The Giants have suffered four consecutive losing seasons and are well on their way to making it five straight. The fans are loyal, but they are tired of rooting for a lackluster team.

The organization is out of excuses at this point. General manager Dave Gettleman needs to be on the hot seat, although it seems like he’s not. New York’s front office spent plenty of draft capital on its offense. Saquon Barkley, Daniel Jones, and Andrew Thomas were all top-10 draft picks.

Injuries have held Barkley back from replicating his rookie season. Jones has not shown anything to warrant his draft position and the idea that he is a franchise quarterback. Thomas has struggled to protect the quarterback. It looks like the Giants dropped the ball with that pick.

Kadarius Toney and Evan Engram were late first-round picks. Fans have been waiting for Engram to breakout for five years now, and Toney has done more talking than playing.

Joe Judge made headlines in the offseason, but there’s nothing to show for it, and he has to be better at his job. The franchise also traded away its most talented player in a while in Odell Beckham Jr. The team invested millions into the defense, and they’ve already proven that was a mistake.

The Giants are in a world of trouble. If they don’t things around, the fans won’t hesitate to let them know.

RELATED: Stephen A Smith Emphatically Argues Eli Manning is Not a Hall of Famer, But His Last Name Will Be The Golden Ticket

Read More
Did you miss our previous article...
https://deals.delivery/sports/larry-bird-once-claimed-that-he-could-probably-get-a-tripledouble-every-night-but-he-wanted-a-higher-achievement