Antonio Brown won’t be on the Tampa Bay Buccaneers’ sidelines during the 2021 NFL Playoffs. A temper tantrum and potshots at quarterback Tom Brady and head coach Bruce Arians ensured he’ll instead likely be resting his ankle from his couch.

In case you missed it (and we don’t know how you could have missed it), the reigning Super Bowl champions cut Brown in early January following his shocking walkoff in a Week 17 victory over the New York Jets. Los Angeles Rams legend Eric Dickerson, who himself is no stranger to feuding with teams, doesn’t expect football fans to forget the act anytime soon. 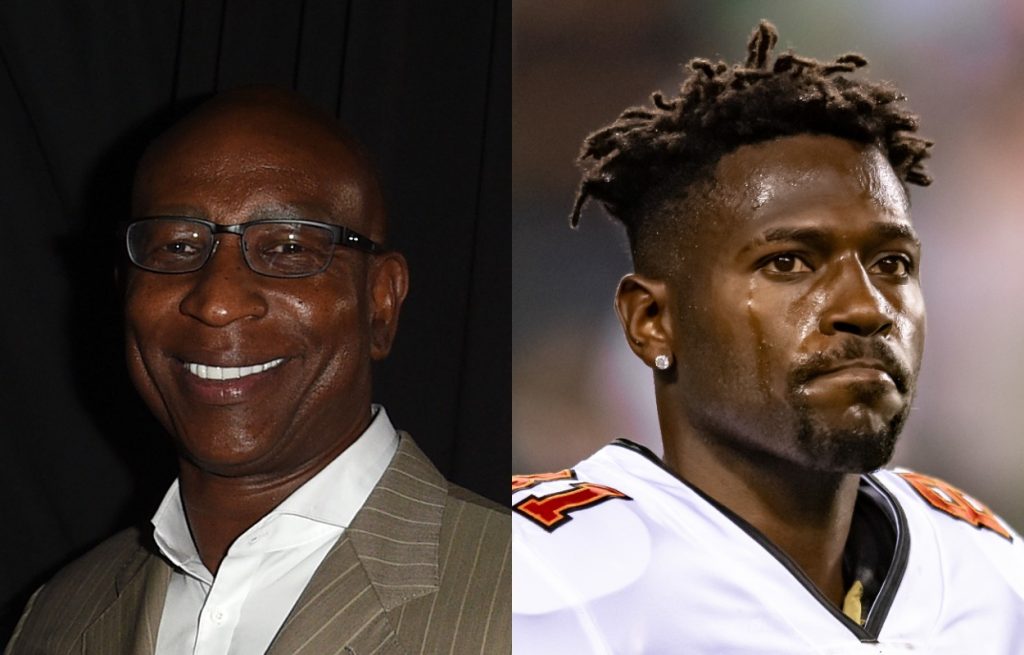 The Buccaneers looked past Brown’s various legal issues when they signed him in October 2020. Arians refused to cut the mercurial receiver when the league suspended him three games for forging a vaccination card. It took Brown having a fit on the sidelines, removing his jersey, and essentially quitting his team for Tampa Bay to finally part ways with the explosive wideout.

Although the passage of time is often forgiving, especially in the sports world, the sight of a shirtless Brown jumping in the MetLife Stadium end zone likely won’t leave our collective memories for quite some time.

In a recent interview with USA Today, Dickerson discussed the free-agent receiver’s situation and the “bad decision” that the legendary running back believes will follow Brown for “the rest of his life.”

In a reminder of why the Buccaneers kept Brown before his tantrum, Dickerson called the wideout a “good player.” The Super Bowl 55 champion hauled in 42 catches for 545 yards and four touchdowns in seven games and three starts this season.

“He works hard,” Dickerson said. “There’s no doubt about his work ethic. But man, that other stuff, it’s like wow.”

Video of Antonio Brown leaving the field after taking off his jersey and shirt and throw it into the stands. pic.twitter.com/1hwNYei5Fq

Although Dickerson is best remembered for his time with the Rams, it is easy to forget the team traded him to the Indianapolis Colts midway through his fifth season. After rushing for 6,968 yards and 55 touchdowns in his first four seasons, the All-Pro running back understandably wanted more money. The Rams disagreed and eventually sent Dickerson packing in October 1987.

When he spoke with USA Today, Dickerson briefly reflected on his feud with the Rams and compared it to Brown’s situation in Tampa Bay.

“There were times when I hated the Rams. I didn’t hate the team; I hated the organization, the way they were doing things. But I would never, ever leave the football field. I was always going to play hard. Look, you can have an issue with management, but you’ve got your teammates out there.”

Brown accused Arians of trying to force him to play through a severe ankle injury and cutting him midgame when the receiver refused. In response, Arians insisted Brown never cited the injury as a reason why he couldn’t return to the field.

Similarly, Dickerson accused former Rams head coach John Robinson of ordering him to play through a thigh injury in 1987. The Rams traded their star running back to the Colts only days later.

Antonio Brown: "Brady can’t do sh– by himself. But you guys gonna make it seem like he’s this heroic guy. We all humans. We all dependent on someone else to do the job. … How did he help me? He helped my career to come back? Because I helped him.”

When Arians reportedly cut Brown midgame, the receiver did not decide he would go gently into that good, New Jersey night. He instead went scorched earth on the Buccaneers’ organization, Brady, and even former Pittsburgh Steelers offensive coordinator Todd Haley across various social media posts and interviews.

On the Jan. 7 edition of the Full Send Podcast, the free agent said Brady “can’t do s– by himself,” and the media turned the three-time NFL MVP into a “heroic guy.” Brady, for his part, sent his best wishes to Brown during his postgame press conference after the Jets game.

As of publication, no team had signed Brown ahead of the postseason. When he appeared on Full Send, he made it clear he does not intend to sign with the United States Football League, which will begin playing games in April.

At 33 years old, Brown has a considerable amount of time before he turns 61. Nonetheless, don’t be surprised if sports networks are still playing his walkoff in blooper reels come 2049.

Read More
Did you miss our previous article...
https://deals.delivery/sports/bol-bols-trade-to-the-pistons-is-offended-after-he-fails-a-physical
tampabaytwoweeks