Another day, another fresh batch of discourse on Prince Harry and Meghan Markle’s tell-all Oprah interview.The landmark TV interview, which was.. 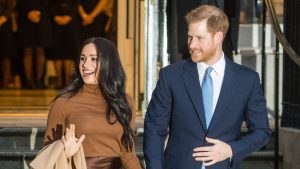 Another day, another fresh batch of discourse on Prince Harry and Meghan Markle’s tell-all Oprah interview.

The landmark TV interview, which was watched by 60 million people worldwide, has been a non-stop topic of discussion and debate since it aired back in March; especially following the BBC’s independent investigation into Princess Diana’s equally controversial Panorama interview from 1995.

The candid conversation, which is over 80 minutes in length, covers everything from Meghan’s struggle with suicidal thoughts, to racist remarks allegedly made by the royal family while Meghan was pregnant with the couple’s first child, Archie Harrison.

It didn’t exactly come as a surprise, then, when news broke that the endlessly dissected interview had been nominated for a prestigious Emmy award.

Oprah With Meghan and Harry: A CBS Primetime Special was nominated in the Outstanding Hosted Nonfiction Series Or Special category, but lost out to Stanley Tucci: Searching for Italy. (I mean, if you’re going to lose out to anyone, let it be Nigel from The Devil Wears Prada.)

Now, though, a royal expert has weighed in on why he thinks Harry and Meghan were snubbed for the award, despite originally thinking it “had a very good chance” of winning.

Speaking to the Daily Star, royal expert and film critic Richard Fitzwilliams said, “They were given too easy a life – there wasn’t a single point that Oprah pushed them on. You can see why an awards ceremony would see flaws that the average viewer would not pick up on.”

He added: “The fact that it did so well with the audience wouldn’t give it a right to win by itself.”

Buckingham Palace issued a statement challenging claims made by the Sussexes in the interview in the days following its broadcast, saying that “some recollections may vary”.

“The whole family is saddened to learn the full extent of how challenging the last few years have been for Harry and Meghan,” Buckingham Palace’s rebuttal read. “The issues raised, particularly that of race, are concerning. Whilst some recollections may vary, they are taken very seriously and will be addressed by the family privately.

“Harry, Meghan and Archie will always be much loved family members.”

The post This is why Harry and Meghan’s Oprah interview didn’t win an Emmy appeared first on Marie Claire.