The Queen was photographed with a walking stick at a major public event for the first time.

After returning to Windsor Castle following a well-deserved summer break at Balmoral, Her Majesty the Queen is officially back in action.In fact,.. 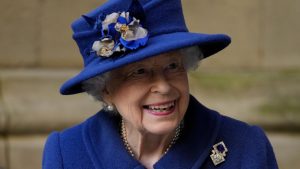 After returning to Windsor Castle following a well-deserved summer break at Balmoral, Her Majesty the Queen is officially back in action.

In fact, between entertaining some very special guests at Windsor Castle last week and attending her first major event at Buckingham Palace since the COVID-19 pandemic began, the monarch has barely stopped since returning to royal duties. (It’s no wonder she needs that secret ‘booze tunnel’ for reprieve, then.)

Yesterday, the 95-year-old monarch attended a service marking the centenary of the Royal British Legion at Westminster Abbey, during which she was pictured using a walking stick for the first time in 20 years.

She was handed the stick after stepping out of her state limousine, but appeared to be moving freely as she made her way to her seat for the service.

The Queen had previously been seen using a walking stick in 2003 and 2004 following a knee operation, but it’s widely thought that yesterday was the first time she has been seen using one at a major public event, and for purposes of comfort, rather than for a specific medical reason.

Additionally, the monarch, who is the patron of the Royal British Legion, did not arrive at the event via the traditional great west door, but via the abbey’s poet’s yard entrance, which meant a shorter route to her seat.

The cobbled and uneven ground outside the abbey is thought to have played a part in Her Majesty’s decision to use the stick.

Accompanied to the event by her daughter, Princess Anne, who gave a reading at the service, the Queen joined a congregation representing groups who have been supported by the Royal Legion over the past 100 years – including veterans and their families, supporters, staff and volunteers.

Yesterday’s event wasn’t the first occasion in which circumstances were adjusted for the Queen’s comfort.

The monarch used a lift, rather than the 26-step royal staircase at the Sovereign’s Entrance, to enter parliament for the state opening in 2016, and has not worn the heavy Imperial State Crown since the same year, with it now placed on a red and gold velvet cushion during proceedings.

The Queen was last seen using a walking aid aged 76, after having surgery to remove a torn cartilage from her right knee. She was pictured using a walking aid on a number of occasions over the following year, but has not been seen to use one since recovering from the operation.

It was reported in 2018 that Her Majesty was still suffering from knee pain, but was reluctant to undergo further surgery due to the recovery time it would entail.

It is unclear whether the monarch will continue to use a walking stick at future public events.

The post The Queen has been photographed using a walking stick for the first time at a major public event appeared first on Marie Claire.

By: Kate McCusker
Title: The Queen has been photographed using a walking stick for the first time at a major public event
Sourced From: www.marieclaire.co.uk/news/the-queen-pictured-using-a-walking-stick-751952
Published Date: Wed, 13 Oct 2021 09:37:55 +0000