The profound meaning behind Meghan's and Harry’s Times Magazine covers

Meghan Markle and Prince Harry were yesterday named on TIME Magazine’s 100 list as two of its most influential people. It also marked the first time.. 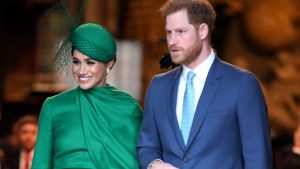 Meghan Markle and Prince Harry were yesterday named on TIME Magazine’s 100 list as two of its most influential people. It also marked the first time the couple has officially made the cover of a magazine – which incidentally fell on Prince Harry’s 37th birthday.

The invited invited photographer Pari Dukovic into what looks to be their Montecito home for the shoot, and pictures show the Sussexes looking striking in some pretty statement power poses.

On the cover, Meghan wears a chic silk white shirt paired with tailored trousers in the same hue, while Prince Harry wears a dark polo neck jumper and trousers. The contrast in colours purposefully throws the focus on the Duchess.

He is also standing behind her and leaning on her, clearly letting his powerful wife shine.

They were dressed by celebrity stylists Nina and Clare Hallworth, whose clientele includes Brad Pitt and Jennifer Aniston. According to Dilys Ng, photo editor of Time100, the cover photograph ‘captures their powerful dynamics as equal partners’.

This is all the more apparent in the other photos inside the magazine, which show them in matching moss green ensembles, emphasising them as equals.

For this second look, Meghan chose an outfit by The Row, a cult fashion label designed by fellow Californians Mary-Kate and Ashley Olsen.

The Duchess also paid a subtle tribute to Princess Diana on the cover, by wearing her Cartier Tank Francaise watch. It was the first expensive gift she bought herself with her Suits pay check, and she hopes to gift it to her own daughter some day.

It’s not known whether Meghan is actually wearing her own watch, or Princess Diana’s, as they are the same, but either way, it’s a lovely nod to the late Princess.