Prince George’s godmother, who was a close friend to Princess Diana, has revealed she honours the late royal with her unusual gifts for the Duke and.. 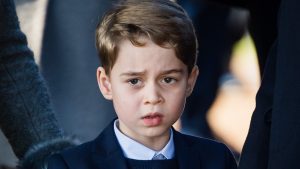 Prince George’s godmother, who was a close friend to Princess Diana, has revealed she honours the late royal with her unusual gifts for the Duke and Duchess of Cambridge’s oldest child.

Julia Samuel has started a little prank when it comes to gift giving, which has now become a tradition she finds highly amusing.

The prank is giving the George, eight, inconvenient gifts, which are noisy and take a while to build, which we assume William has to tackle, because this is what Diana used to do to her.

Speaking on the How To Fail podcast with Elizabeth Day, Julia, 62, – who is one of Prince George’s seven godparents – said: “I do to George what [Diana] did to us. Which is give impossible toys which are really noisy, take a lot of making.”

“I come in slightly tipped by the size of the present that William then has to spend days putting together.

“And then put all the machinery together and it makes awful tooting noises and lights flashing and all of that. That makes me laugh and it makes George laugh.”

Julia, who is the founder patron of the Child Bereavement charity – has revealed the Queen’s great grandson is quite the character, and the late Princess of Wales would have adored him.

She added: “He is amazing. He’s funny and feisty and cheeky and God [Diana] would have loved him so much. That is heartbreaking for all of them.”

While George is entertained bu Julia’s gifts, William and Kate have previously revealed their son has a penchant for computer games, as well as football and aeroplanes.

But the love of computer games is a habit the couple – who also have daughter Princess Charlotte and son Prince Louis – are trying to get him out of by limiting their children’s screen time.