And just like that (nope, not the new Sex And The City reboot), New York and London Fashion Week are over, and with them a preview of the.. 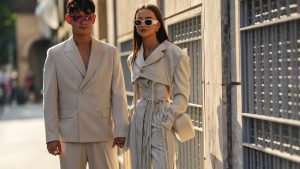 And just like that (nope, not the new Sex And The City reboot), New York and London Fashion Week are over, and with them a preview of the spring/summer 22 collections from our favourite designers, including Victoria Beckham, JW Anderson and Erdem to name but a few.

But don’t worry, that doesn’t mean you can’t get another dose of sartorial inspiration, because things have only just kicked off at Milan Fashion Week, and of course it’ll be Paris after that.

Editors and influencers have already descended on the stylish streets of the Italian fashion capital, to see what designers such as Jil Sander, Prada, Fendi and more have in store for us for the new season.

It’s only been a day, but so far I can tell that the street style set have definitely brought their A-game. As is always the way in Milan, outfits have been paired back but chic. Think knitted dresses, tailoring, earthy tones of khaki and brown and plenty of knee high boots.

But that doesn’t mean there haven’t been some flamboyant styles either – this is Italy after all. There are plenty of colour blocking, prints and logos to go around.