Lady Louise Windsor "had no idea" that the Queen and her grandmother were one person.

Lol. Her Majesty the Queen may be one of the most famous figures in the world, but when it comes to her family, she’s still very much just.. 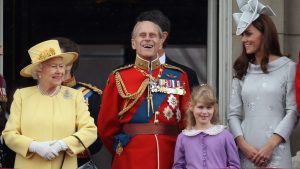 Her Majesty the Queen may be one of the most famous figures in the world, but when it comes to her family, she’s still very much just “grandmama”. (At least, she is to her two youngest grandchildren, Lady Louise Windsor and James, Viscount Severn.)

Having grown up at Bagshot Park, just a short drive away from the Queen at Windsor Castle, Lady Louise is thought to have a very close bond with her grandmother – so much so that, as their mother Sophie, the Countess of Wessex recently revealed, she and her younger brother James affectionately refer to the monarch as “grandmama”.

When she isn’t busy giving the Duke and Duchess of Cambridge a much-needed helping hand with their three children, Lady Louise, who will turn 18 in November, is thought to regularly visit her grandmother at both Windsor and Balmoral, and is rumoured to have a very down to earth bond with Her Majesty.

So normal, in fact, is the Wessex children’s relationship with the monarch, that Lady Louise spent years in the dark about who her grandmother really was.

Speaking in an interview recorded ahead of Her Majesty’s 90th birthday, the Countess of Wessex told Sky News, “I mean Louise had no concept really that the Queen and her grandmother were one and the same person.”

She added, “It wasn’t until she was at school that other children were mentioning it and saying, ‘Your gran is the Queen’. And she’d come home and say, ‘Mummy they say that Grandmama is the Queen.’ And I said, ‘Yes,’ and she said, ‘I don’t understand what they mean.’”

She’s not alone, though.

Her father, Prince Edward, also admitted that he didn’t realise that his mother was the monarch until he was five or six.

“I can’t necessarily remember when that realisation was there,” he said. “When you grow up in that family and in that environment, that’s just what your parents do.”

How sweet is that?

The post Lady Louise Windsor ‘had no concept’ that the Queen and her grandmother were the same person appeared first on Marie Claire.

By: Kate McCusker
Title: Lady Louise Windsor ‘had no concept’ that the Queen and her grandmother were the same person
Sourced From: www.marieclaire.co.uk/royal-news/lady-louise-windsor-grandmother-the-queen-747034
Published Date: Tue, 31 Aug 2021 11:04:25 +0000