Getty ImagesKate Middleton is one of the most talked-about women in the world, with her fashion influence turning small businesses into sell-out.. 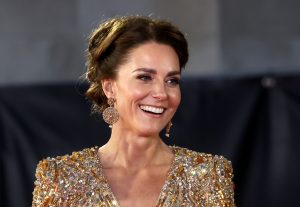 Kate Middleton is one of the most talked-about women in the world, with her fashion influence turning small businesses into sell-out brands and her hairstyle changes sparking trends of their own.

She was crowned the coolest female of the moment and has been brought forward as ‘Queen-in-waiting’ something that royal experts explain is a clever move by palace aides who have realised just how popular Kate is.

Royal expert Katie Nicholl weighed in on Kate’s role elevation this week on True Royalty’s Kate: The Making of a Modern Queen.

‘We are seeing a Queen-in-waiting. We are seeing the Duchess take on more duties, more royal engagements, more of a public profile than ever before,’ Katie explained. ‘This is all very deliberate. It’s very much part of the Palace machine bringing her from the shadows of Anmer and into the forefront, into the spotlight, because they are very clever.

‘They realise the power of Kate and the potential of Kate and William as this young, glamorous, dynamic duo who actually do have the ability to reshape and project the monarchy into the future.’

A post shared by Duke and Duchess of Cambridge (@dukeandduchessofcambridge)

This has never been more clear than in her new official portraits, released over the weekend by the Palace to mark her 40th birthday.

The photographs in question show Kate Middleton in a more regal light than ever before, with fans comparing them to past photographs of Queen Elizabeth II and Queen Victoria.

A post shared by Duke and Duchess of Cambridge (@dukeandduchessofcambridge)

The role elevation is something that has not been lost on the public, with fans taking to the comment section in their thousands to call her a ‘Queen’.

‘Now that is a future Queen,’ commented one fan, while another posted: ‘We are witnessing history in the making’.

‘The Duchess will be one for the ages… truly a queen to come,’ one added, while another wrote: ‘One word only: QUEEN!’

Well this is lovely.

Happy Birthday to the Duchess!