She has spoken candidly about the 'deep pain' her miscarriage caused her Chrissy Teigen has opened up about the realities of dealing with miscarriage .. 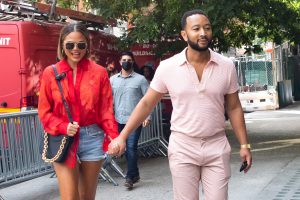 Chrissy Teigen has opened up about the realities of dealing with miscarriage on Instagram.

Last year, the model and husband John Legend heartbreakingly lost a son, who they named Jack, at 20 weeks pregnant.

She’s now shared on her social media that she believes she used her new cookbook, Cravings: All Together, to distract herself from her grief.

Writing that she’s been ‘feeling slightly down lately’, she reflected on her life and the earlier years of her and Legend’s relationship, which they spent living in New York.

Captioning a photo of the couple after dinner at Franks Restaurant, she said that when they first got together, she’d frequent the Italian restaurant and ‘day drink’ before going on long shopping sprees.

She shared that she was ‘basically a functioning alcoholic’ and reflected on how, while she hasn’t been relying on said old, unhealthy cruxes to deal with her trauma, she has thrown herself into the creation of her latest cookbook, instead.

The model explained: “Anyhowwwwww just reminiscing about New York a lot lately, when things were simple, thinking about all the stuff I’ve done and been through not just this year but in my life.”

“I’m slightly down lately. It kind of started when I was thinking of my book caption and typed out ‘my third baby is here!!’, as in cookbook, then realised my third baby will never be here.”

“Then I realised I threw myself into the book to not think of the real, actual third baby.”

“I don’t really feel like I fully processed Jack and now that I don’t have the alcohol to numb it away, things are just…there, waiting to be acknowledged. I guess what I’m saying here is life is so fucking complicated. and get the lasagna??? wow this was a rollercoaster !!!!!”

If you’ve suffered from a miscarriage or know someone who has, know that you are not alone. The Lullaby Trust has a bereavement helpline open for anyone who needs support about the sudden death of a baby – 0808 802 6868 – as does SANDs, the stillbirth and neonatal death charity – 0808 164 3332.