The path is never straight forward, especially as a woman.Female empowerment: 15 women on barriers they overcome for successUntil we can comfortably..

The path is never straight forward, especially as a woman. 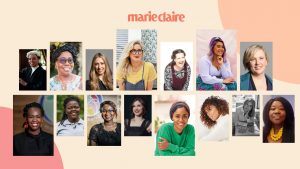 Female empowerment: 15 women on barriers they overcome for success

Until we can comfortably say that we live in a world where there is no gender inequality, there will always be some ways in which women are on the back foot. These can manifest as barriers to women’s health, wealth and success, but what’s inspiring is the sheer number of women who overcome these hurdles every single day.

mothers2mothers is a non-profit organisation that works to break down such barriers for women across Africa. For the past two decades, m2m has been working to support a new generation of African female leaders who are shattering norms and breaking down gender and cultural barriers to create a ripple effect of health and change in their communities.

As the organisation celebrates its 20th year this year, they’re celebrating with the launch of their annual She’s Got the Power campaign – and Marie Claire is right there with them. So to mark this momentous occasion, and to celebrate all the important work mothers2mothers has done so far, we asked some of the most inspiring, prominent women we know to share the biggest barrier they have faced as a woman, and how they have overcome that to reach where they are today.

Prepare to feel all kinds of empowered… 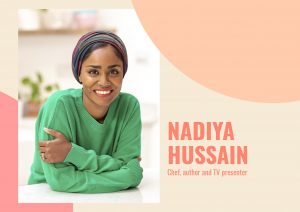 “Being a ‘stay at home’ mum was a barrier. It is still by far the best job I will ever do! But the stigma attached to being at home with my children, to raise my family really affected my mental health. I would shy away from answering the question ‘so what do you do’? Because being at home with children felt like the lazy answer. But anyone who has stayed at home to raise their children will know it is no walk in the park. Even though I knew being at home with my kids was the right thing to do, I struggled with my mental health which directly affected my self-esteem. The lack of belief in myself stopped me from moving forward and simply dreaming. I know there are women out there who resonate with this. All I have to say is: We are raising the future, let’s do it with pride!” 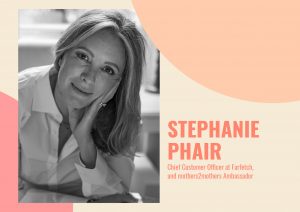 “Besides and in addition to the obvious barriers that women face around the world, women can often be their own worst obstacle to progress — whether it be because of self-doubt, overthinking situations, or seeing others as competition. I’ve had many moments of self-doubt at pivotal moments in my career. The best advice I’ve received is: You don’t know whether you can do it until you do it. And if you can’t, then reassess, but don’t make that decision prematurely and limit your opportunities.”

MP for Sevenoaks and Swanley 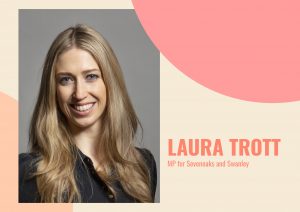 “It’s no secret that politics has historically been a male dominated space – when I was starting out, I was often one of the only women in the room, or at least in the minority. One of the barriers I believe is visibility – growing up I saw mainly male politicians, and there were far fewer role models. Luckily for me, I’ve worked with many incredible people over the years, male and female, who have encouraged me to achieve my goals. It is partly due to this support that I am the first woman to represent my seat of Sevenoaks. But that is not always the case, which is why equal gender representation in public life is essential – young women should never feel like they cannot achieve an ambition simply because they don’t see people like them in the careers they want. The good thing is positive changes are already being made, and representation is improving, but there is always more work to do.” 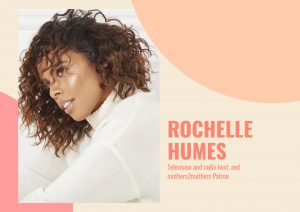 “One of my biggest challenges has been to understand that fear will always exist, and rather than shy away from it, my mantra is to feel the fear and do it anyway. I think everyone feels at times fear of failure or suffering from imposter syndrome. However, I’ve learnt that you’ll never feel 100% ready or that you have all of the answers. But if you’re passionate, you sometimes need to lean into it and not let fear or anyone else’s limiting beliefs hold you back.” 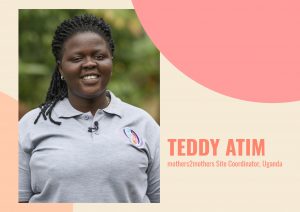 “As a woman in Uganda, I have faced many tough situations in life, such as not being given the right to make decisions in my family or even community. I learned to speak up after seeing that there are women out there who can stand up for themselves, women like mothers2mothers’ (m2m) Mentor Mothers — women living with HIV employed by m2m as frontline health workers. You see, where I come from, women can’t dare to think or speak for themselves. The only advice I have is to never allow someone to make you feel insignificant or small. You, as a woman, are too precious for that.” 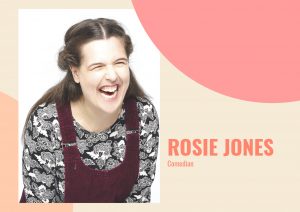 “Despite never feeling like my disability was a barrier as such, I never even considered pursuing stand up comedy, because of my slow speech. All the comics I watched and loved on telly spoke at a million miles an hour, and that just wasn’t an option for me. I can’t be a comedian, I would think, everyone would get to the punch line before I did! But then, I realised that if I found a way to write jokes where the audience thinks they know the punch line, but in actual fact, my slow speech draws the audience in, then I am able to surprise them with a misdirection. I have learnt to use my ‘barrier’ to my advantage, and I am now extremely grateful for my lovely, slow speech!” 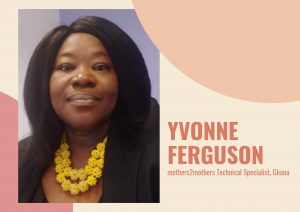 “I was a shy yet confident young girl who grew up into a strong and outspoken female leader. Some of the barriers I have experienced on this journey are battling cultural ideals for women to be quiet, soft-spoken, and vulnerable. Confident female leaders like me are seen as women who have betrayed the very essence of their femininity — even by other women. I have overcome these barriers by setting myself very high standards, and demonstrating excellence through hard work and diligence so that I am at the table — all while maintaining a heart for mentoring the next generation of women leaders.” 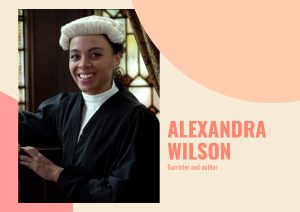 “For me, the biggest barrier in my professional journey as a woman has been challenging sexist views and sexual harassment, even in the courtroom. It can be very difficult as a junior member of a profession to challenge comments and attitudes, especially when you are the only woman there. My confidence has grown as I have gained experience, but it can still be tough. I think it’s so important that men speak out against other men – it can’t always fall on us as women.” 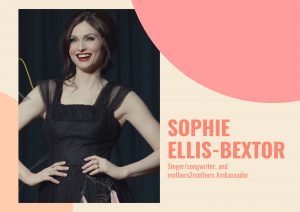 “The biggest barrier I’ve faced was losing my record deal when I was 20. I’d been signed straight out of school with my first band, Theaudience. The momentum of the record deal swept me up while my friends went to university. When the band was dropped, I had no prospects anymore. I’d credit that failure – and others I’ve had along the way – for teaching me how to become resilient. To other young girls and women, I’d say the same: failure feels awful but fear of failure can be so limiting. Once you’ve had the worst thing happen, you will stop worrying about how that might feel. It will liberate you, I promise, even though it hurts at the time.” 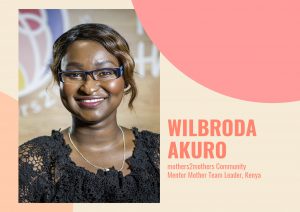 “The challenges I have faced as a woman in Kenya have mostly been around gender discrimination — for instance not being given an opportunity in certain fields which are considered as male roles — and being sexualised as a woman. I overcame those by speaking up and defending myself, especially in a case where a prospective employer asked me to have sex with him in order to give me a job. I refused, and of course, I never got the job afterwards. My advice would be to never underestimate the power you have as a woman. Believing you have what it takes to be the best.” 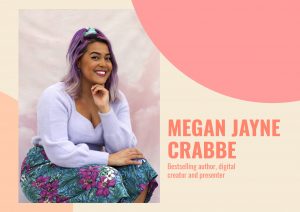 “One barrier that I still struggle with is a deep fear of making mistakes. It would be easy to just call that a character flaw, but I think that ignores the reality of how social conditioning within a patriarchal society works. Boys are still far more encouraged to be explorative and adventurous where girls are encouraged to be perfect and people-pleasing. I’m trying to get better at going in without knowing everything first and trusting it’s okay to learn through mistakes along the way.” 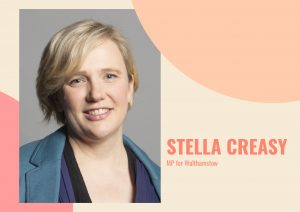 “Words and labels matter. They are used to dismiss women before they even get into the room to make their case. So use your own definitions wisely. Never let anyone call you a difficult woman because you stand up for yourself — or call yourself one. If someone tries to dismiss you as one, then correct them — you’re not difficult, you’re just different.” 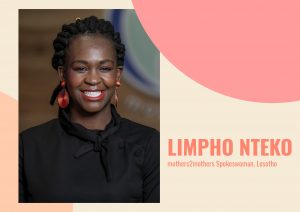 “Growing up in a traditional country has its beautiful side, but it also comes with challenges, especially for a young girl with dreams, like me. It doesn’t help finding out at a young age that you are living with HIV — that was a battle on its own. Add being a young widow, and the odds just seem to be against you. But my confidence and resilience always came through. I speak up for not only myself, but my two daughters, who will learn the power of their own voices. I’m part of a generation of strong African women, and I know my worth. My advice to any young girl is to know the value of your voice.” 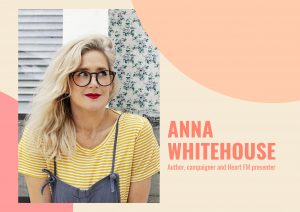 “My former boss asked when I was ‘leaving’ instead of when I was ‘on maternity leave’ when I was pregnant with my first, and that was the beginning of the maternity discrimination that came my way. What followed was a refusal to allow me to work flexibly so I could simply pick up my daughter from nursery at 6pm. I asked to come in 15 minutes earlier so I could leave 15 minutes earlier. The fear was if I was afforded this flexibility it would ‘open the floodgates’ to others. I felt I was failing at my job and failing as a mother and so I quit — because I realised the system I was working in had failed me and my family. I quit and have since tried to open the floodgates for anyone else with caring responsibilities, living with disabilities – or simply wanting to live – to work flexibility. To work in a human, more humane way.” 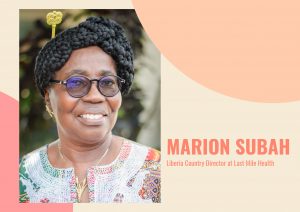 “As a nurse-midwife and health leader in Liberia, my greatest challenge is ensuring mothers and children have the care they need. During the Liberian civil war, many health professionals fled or were killed. There were only 50 doctors left for the entire country. I’ve learned that a powerful solution involves bringing care directly to people’s doorsteps. In community health, we emphasise the vital things people can do to care for themselves, their families, and their neighbours. To improve society, we have to start now with children. They are the future. That is why it is so critical to work with mothers, right from the start. When you care for the mother, you are caring for the mother and the child.”

You can find out all about mothers2mothers’ important work here.